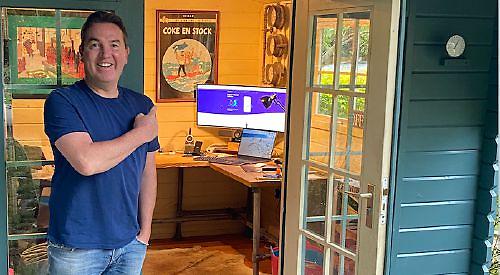 A BUSINESSMAN from Highmoor has secured £20m in investments for his company during lockdown — while working in his garden shed.

Peter Briffett launched Wagestream, a payment tool for employers, two years ago and he now hopes to expand the company overseas.

It allows workers to instantly access money they are owed by using an app, rather than waiting for the end of their pay cycle.

Staff can also see how much money they have earned and transfer funds into their account for any unplanned expenses.

The business is currently based in London but will soon be moving into the Netherlands, Spain and America.

Mr Briffett, 48, feels this model for paying staff has become even more important during the coronavirus pandemic and a number of Henley businesses, including Cafe Rouge and Zizzi, have signed up to Wagestream.

But staff have been working remotely since March and Mr Briffett has been holding Zoom meetings and delivering investment pitches from his garden shed.

Mr Briffett said: “We set it up in order to allow people to get paid whenever they want, rather than having to wait until the end of the month. It hopefully prevents people from going into their overdraft, or getting into debt through loans.

“It also allows them to address any unplanned expenses. It shows them in real time how much they are earning and if they want some money, they can just take it.

“I think the reason we have been able to make so much money recently is because a lot of companies have seen this and realised the financial strain of their workforce will be detrimental to them in the long term.

“We deal with a lot of hospitality brands and they have had a particularly horrific time with being closed down and lost revenue. Because we sit between employee and employer, we are able to release furlough money.”

Early investors for Wagestream included the Joseph Rowntree Foundation and Village Global, which is backed by Bill Gates and Jeff Bezos, the founders of Microsoft and Amazon respectively.

It is now used by a number of national brands, including Bupa, Carluccio’s and Holiday Inn, as well as five NHS trusts.

Mr Briffett lives with his wife Zoe, 47, who is a teacher at the Oratory Preparatory School in Woodcote. They have two children Max, 14, and Milo, 15, who both attend the senior school.

He believes payday loans will no longer be offered by 2022, with his business currently helping 37 per cent of its users to avoid them.

Wagestream also offers educational tools, having teamed up with The Money Charity and Money Advice Service to offer advice on how to manage money.

Mr Briffett thinks the app will encourage workers to stay with a company for longer, because they offer a flexible approach to wages.

He added: “A lot of companies are very worried about the impact of the pandemic on their workforce. Fifty-five per cent of UK families don’t actually have £250 in savings, so if you miss a month’s earnings then it really is a huge deal.

“If you work at Cafe Rouge, the money will come into your account with the company’s name on it, but we have funded that. It means it doesn’t impact the company’s cash flow.

“We have had additional funding in the last week or so, which will allow us to grow from Henley and beyond to more international companies.

“Everything has had to be done over Zoom and over the phone since March. My broadband hasn’t been too bad, although I have had to deal with two boys playing games.

“A lot of investors can see this is going to be something really meaningful because of the financial devastation due to the pandemic.”

Mr Briffett founded the business with Portman Wills, who lives in Surrey, after they met in 2017.

They both read an article in the Wall Street Journal about Walmart in America trying to offer flexible pay to their workforce, which was the inspiration for the business.

Mr Briffett said: “In the US, they are paid every two weeks, whereas over here and in the rest of Europe it is every month, which means there is a lot more stress with managing your finances.

“We will probably end up looking for office space in Henley and not having a London office, but a more regional presence instead.”

Before Wagestream, Mr Briffett was the managing director of LivingSocial, a website offering discount on shopping, for the UK and Ireland.

He has also successfully built and managed a number of technology start-ups, including iView Multimedia, which he sold to Microsoft in 2006.