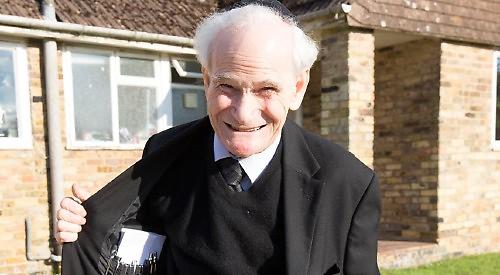 A FORMER journalist who escaped Nazi persecution as a child and helped to re-establish the Jewish community in north-eastern Germany has died, aged 93.

William “Willy” Wolff, who lived at Highmoor Cross, worked in Fleet Street for 30 years before being ordained as a rabbi at the liberal Leo Baeck College in London in 1984.

He was later appointed chief rabbi to the former East German state of Mecklenburg-Western Pomerania, a post which had lain unoccupied for 65 years.

Mr Wolff achieved widespread recognition in 2016 when he appeared in the feature-length documentary called A Gentleman Before God, which showed him carrying out his pastoral duties in the city of Schwerin.

He was born in Berlin to an Orthodox Jewish family who fled the country in 1933, when he was six, to start a new life in Amsterdam.

They had sensed the growing climate of anti-Semitism and decided to leave when Magda Friedlander, a neighbour’s daughter, married Nazi propaganda minister Joseph Goebbels.

The family struggled to make ends meet so sailed across to Britain in August 1939, just days before the Second World War was declared on September 1.

Mr Wolff changed his name from Wilhelm and attended Hendon County Grammar School before studying international relations at the London School of Economics.

He first worked for Reuters’ radio listening station, then joined the Daily Mirror, eventually becoming Parliamentary correspondent covering Britain’s accession to the European Economic Community. After that he was appointed a columnist and letters editor for the London Evening News, often writing letters of his own if there was space to fill.

Mr Wolff had been drifting from his family’s faith since early adulthood but was increasingly drawn to more liberal forms of Judaism and decided to pursue a rabbinical career in 1979.

Following his ordination, he served at synagogues in London, Newcastle, Milton Keynes, Reading, Brighton and Wimbledon.

He performed blessings for Jews marrying people of other religions, which was against the rules of the time but he argued it would keep the faith alive by discouraging them from converting.

From 2002 onwards he divided his time between his bungalow at Highmoor Cross and Germany, which he said had a less ageist culture.

Mr Wolff also wanted to serve the country’s growing Jewish population, many of whom were emigrating from Russia and wanted to be educated on their heritage. He taught himself Russian to better communicate with those under his ministry.

He was elected deputy chairman of the General Rabbinical Conference in Germany in 2005 and in 2014 he was made a citizen of Schwerin on the same day the city paid tribute to the victims of Nazi despotism.

He looked after three synagogues in his state and regularly wrote for newspapers and spoke on television He ordained rabbis in Berlin and Dresden, officiated at the consecration of new synagogues and campaigned for Jews with German heritage to consider returning, arguing the threat of far-right politics had long subsided.

More recently, when Pope Benedict XVI sparked uproar by appearing to support the reinstatement of Catholic prayers for the conversion of Jews, Mr Wolff spoke to calm the row and called for stronger relations with the Vatican.

He continued offering advice to Jewish communities after retiring in 2015 although he spent most of his time in the Henley area.

In 2017 he was made a citizen of Rostock, also in Mecklenburg-Western Pomerania, in recognition of his “extraordinary and lasting services” to its Jewish residents and the promotion of inter-religious dialogue.

Mr Wolff didn’t marry before his death in London on July 8, which he said was one of his few regrets.

However, he didn’t dwell on it, telling the Jewish Telegraphic Agency: “Ultimately, what matters is what you do, not only in personal relationships but in daily life.”

Britta Wauer, who directed the 2016 film, told the JTA: “Willy Wolff was probably the most unlikely rabbi in the world.

“He was one of the most wonderful, inspiring, charming characters I ever met. I’m grateful… for his wisdom, his smile and what we call Lebensfreude, a deep joy for life.”

Josef Schuster, head of the Central Council of Jews in Germany, said: “With his return to Germany, Rabbi Wolff made an enormous contribution to reconciliation and the development of Jewish life.

“He was an outstanding personality, a rabbi who was always there for his congregation in the best sense - as a teacher of religion and pastor, but also a person with great knowledge and a fine sense of humour.”