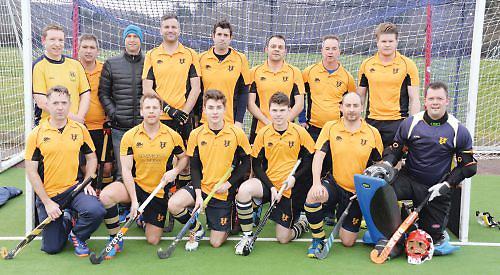 HENLEY 2nds got the second half of their league campaign off to a stuttering start against Harrow at Jubilee Park last Saturday.

Missing quite a few regulars, they struggled to deal with Harrow’s counter-attacks, and ultimately finished on the wrong side of a nine-goal match.

On a cold afternoon in Henley, it was the home side who started the brighter. Enjoying more possession and creating some good opportunities in the opening exchanges, they failed to take advantage and it was Harrow who took a 1-0 lead into half-time.

A familiar start to the second half saw Henley enjoy more of the ball, but they couldn’t convert their possession into goals.

A neat breakaway from Harrow secured a 2-0 lead after 45 minutes. This seemed to act as a catalyst for Henley who finally found a way through Harrow’s defences and went on a three-goal scoring spree over a 15 minute period.

A good goal from Geoff Joseph was backed up by finishes from Jody Measures and Guy Harmer as the amber and blues led 3-2 with 20 minutes to go.

Taking the lead seemed to be a burden to the home side, who again relinquished their grip on the game, conceding two loose goals to trail 4-3 as the match entered it’s last 10 minutes.

Both teams created more chances, but it was Harrow who provided the killer blow with a fifth and decisive goal to thwart Henley’s hopes of taking anything from the game.

Joseph converted a scrappy goal in the closing minutes, but it was too late for Henley to go again and the final whistle went with the score at 5-4 to the visitors.

Elsewhere last weekend HENLEY 4ths drew 4-4 away to READING ROVERS 6ths while on Sunday HENLEY U14 AND U16 BOYS won 5-1 away to local rivals SONNING U14s DEVELOP-MENT.