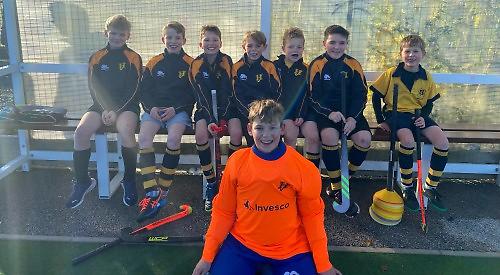 HENLEY BOYS U12s continued their fine form this season as they made it five wins from five at their latest set of Berks, Bucks and Oxon league matches where they were pitched against Maidenhead, Reading, Windsor, Newbury and Thatcham and Yateley.

Henley started with a 2-0 win against Maidenhead, with Zack Barrass getting the first of a number of goals for him on the day.

The pick of the goals was Jamie Taylor’s “tomahawk” strike in a 3-0 win against Newbury and Thatcham.

Henley played fluid hockey throughout having success down the flanks with Xander Morant being highly productive on the right wing, setting up many of his Henley teammates throughout the day.

Henley rounded off their matches with a 4-0 win against Yateley where Edward Cary scored a hat-trick and Oliver Whale netted his first goal for the club.

At the other end of the pitch, the defence were equally as impressive. Tomas Chamberlain was ably assisted by Hugh Jenkins at the back and on the odd occasion that opposition strikers were given an opportunity on goal, keeper Alex Woolfrey shut them out, to the point that the side recorded five clean sheets.