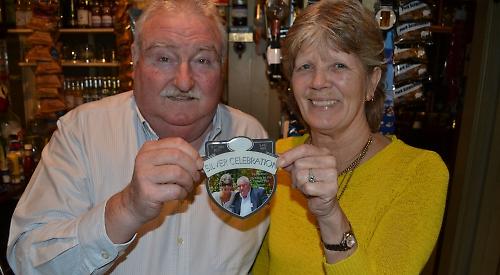 A COUPLE have marked 25 years of running the same pub.

Pat Thatcher and her partner Tony Read were regulars at the Flower Pot in Aston in 1992 when they learned the landlord was leaving and decided they would like to take over.

They are now Brakspear’s longest-serving tenants in a single pub.

A party was held at the riverside pub on Friday evening to mark the milestone.

The company created a special silver jubilee pump clip for the couple and rebadged its Brakspear bitter for the occasion.

The couple originally thought they would stay at the pub for three to six years.

Mrs Thatcher, 65, said: “We used to come in on a Sunday and one day the landlord said he was leaving and Tony said to me, ‘do you fancy going for it?’ I thought he was mad. I didn’t think I'd still be here 25 years later!

“The years have just flown by, I can’t believe it. A lot of customers have come and gone but life goes on.”

Mr Read, 68, added: “I always used the pub and wanted to keep it as it was. We wouldn’t have taken any other pub on. It’s unspoilt and there’s not many of them about.”

Famous faces to have graced his bar include singer Sir Tom Jones, who performed at the Henley Festival in 2011 and during his set encouraged people to visit the Flower Pot.

Footballer turned actor Vinnie Jones has also visited, as have dancer Michael Flatley, chef Marco Pierre White and actress Brigitte Nielsen. The pub’s other claim to fame is as a location for films and TV shows including Miss Marple, Pie in the Sky and The Sculptress.

Emma Sweet, Brakspear’s marketing manager, said: “There are not many people that get to 25 years.

“Pat and Tony prove you can live and work in the same place and run a successful pub.”

She said the pub was a “Henley institution” and many residents walked from the town to enjoy a pint by the river.

The pub, which was built in 1895, has a large garden and is a popular stopping point for walkers and cyclists, particularly in the summer.

It also has another attraction — Britain's largest private collection of cased fish with more than 100 examples adorning the walls, including a pike that had weighed more than 50lb when it was alive.