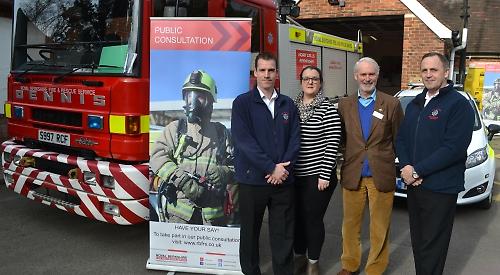 FIRE chiefs say they have to make “difficult” decisions to save money, which could include closing Wargrave fire station.

The Royal Berkshire Fire Authority needs to save £2.4 million by 2020 and has suggested seven cost-saving measures, three of which include shutting the station in Victoria Road, which currently has nine retained firefighters.

A public consultation on the options began in December and will run until Monday, March 13.

A second drop-in event was held at the station on Sunday. Copies of documents were available to view and representatives were on hand to answer questions.

More than 20 people attended the event, including residents, members of the fire service and Wokingham borough councillor Angus Ross, who is a member of the fire authority.

Deputy chief fire officer Trevor Ferguson said: “Effectively the authority has to save £2.4 million by the end of the next comprehensive spending review and we’re presently consulting on options that will save £1.4 million from frontline services.

“We’re here to give people information and to make sure they share their views and their thoughts on the proposals. No decisions have been made.

“The fire authority will absolutely take on board what people say and then take that back and make its decision, having all the relevant views of their stakeholders.

“These are very difficult and challenging decisions which members of the fire authority are faced with. Their presence here today shows how committed they are to hearing the view these very difficult decisions.”

The feedback from the consultation will be considered at a meeting of the authority on April 18 and the final decision on the options will be made in May.

The consultation document can be viewed online at www.rbfrs.co.uk/consultation