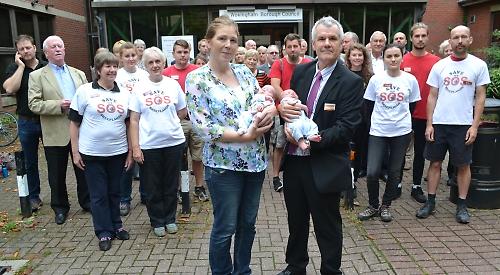 SEVEN businesses at a garden centre have been ordered to leave by May after a High Court judge ruled their presence was unlawful.

Hare Hatch Sheeplands, near Wargrave, had been the subject of enforcement action since 2012 when owner Rob Scott was first accused by Wokingham Borough Council of breaching the green belt and extending a café and play area unlawfully.

The council said the business only had planning permission to operate as a plant nursery, café and farm shop, not a full garden centre, and that Mr Scott couldn’t prove the unauthorised operations had been running for 10 years or more.

The council also claimed that Mr Scott ignored an enforcement notice, leaving it with “no choice” but to take legal action.

Mr Scott and the businesses, which include a fishmonger, pet food store and antiques dealer, appealed the notice and the case was heard at the High Court last month.

In a written judgement issued this week, judge Karen Walden-Smith granted an injunction against the garden centre, meaning it has to comply with the enforcement notice and any unlawful activities must cease by May 1.

She said Mr Scott had “completely exhausted” the planning process in fighting the enforcement action and rejected his argument that the notice was flawed and ineffective.

She also ordered him to pay the council’s costs, beginning with an initial payment of £20,000 within 28 days.

The judge said: “There is a clear need for the local planning authority to be able to enforce planning control in the green belt in the general interest of the public.

“Even if there is a general and widespread support for this business, as I am told there is, that support does not circumvent the need for planning control.”

She conceded that her ruling would “adversely affect” businesses on the site but said Mr Scott and other occupiers had shown “a clear and wilful intention to breach planning control” and that he had been warned about the council’s intentions over a “considerable period of time”.

Judge Walden-Smith said: “It is clear from the evidence that this was an issue fraught with difficulties. Mr Scott has heavily invested in the site and I am told that the effective closure of the business would result in extreme personal hardship.

Judge Walden-Smith asked the council to redraft the injunction notice so it would be “understandable” to the businesses.

After the ruling, Mr Scott said he had not given up hope.

He said: “The next step is for my legal team to view the reworded document and advise me on what action we can now take.

“I will not know what that is until we have all had a chance to get together and discuss the options.”

Mark Ashwell, the council’s executive member for planning and regeneration, said: “This is a difficult situation because we know there is local support for Hare Hatch Sheeplands and that some businesses on the site will be adversely affected by the judgement.

“But the truth is, while we’ve been seeking a compromise with the landowners in good faith, they’ve been using more and more green belt illegally.

“This is not an action we have taken lightly. The judge’s decision is testament to our council’s resilience in the robust defence of our green belt.

“The green belt must be protected from harm caused by unauthorised activity even if some people support that activity.”

The centre had drawn support from hundreds of customers as well as several Wokingham borough councillors and even Prime Minister Theresa May. At a public meeting in 2014 the then Home Secretary said she shopped at the centre and offered to broker a deal between the business and the council.

Last year, more than 4,800 people signed a petition started by Mr Scott calling for an end to the dispute, arguing that it was costing him and the taxpayer “ridiculous” sums.

The petition prompted a debate at a council meeting in November, which heard that Mr Scott is likely to face further legal action.

Cllr Ashwell said the council had already spent more than £45,000 on the dispute and that Mr Scott could be prosecuted for not complying with the enforcement notice, so the council could then seek reimbursement using the Proceeds of Crime Act.

In September, a public inquiry refused a separate appeal by Mr Scott against the council’s refusal to grant a certificate of lawful use.

Inspector Bridget Campbell said she could not allow the appeal as she was bound by a precedent stating that certificates could not be issued for a site which was the subject of an enforcement notice.