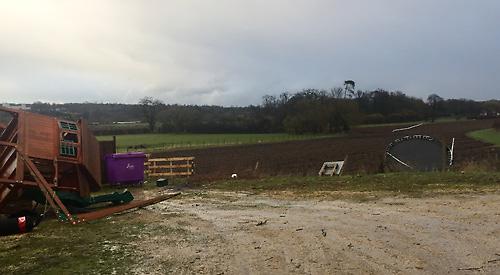 Winds of up to 60mph caused by Storm Doris have blown over two trees on the main road between Henley and Wargrave.

The trees have fallen either side of Conway's Bridge and are blocking part of the Wargrave Road.

The first is lying near Marsh Lock while the other one is near the junction with Kentons Lane.

Cars are being forced to mount the pavement to pass the trees, which are both blocking the southbound lane towards Wargrave.

Police were on the scene at about 4.30pm. One officer was directing traffic while another attempted to remove the first tree, using a handsaw to saw off the branches.

The A4074 near Woodcote was also closed at about 1.30pm after a tree fell on the road and another was blown down on Greys Road between Henley and Rotherfield Greys.

A 6ft garden wall was also blown by the storm over in Wargrave.

A 10m section of the wall fell at about 11am, blocking a footpath between Ridgeway and Dark Lane.

At the Black Boys Inn in Hurley children's play equipment had been blown over in the storm (pictured).

A climbing frame was on its side and a trampoline has been upended.

The Met Office has issued a yellow weather warning for the area, with the storm expected to continue in to this evening.