'Potholed roads are a disgrace and getting worse' - ex-mayor 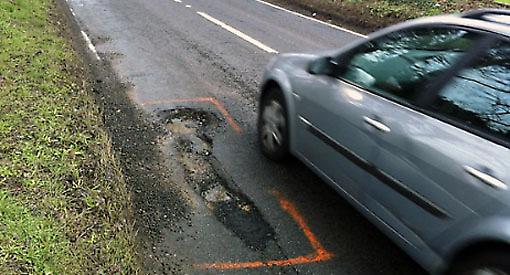 HENLEY’S problem with potholed roads is getting worse, residents.

The issue of damaged streets, including St Mark’s Road and Gravel Hill, was raised at a meeting of the town council last week.

There were also complaints about potholes not being repaired quickly enough by Oxfordshire County Council, the highways authority, and that FixMyStreet, a website for reporting potholes, doesn’t work properly.

Pam Phillips, who lives in St Mark’s Road, said potholes were widespread and caused a hazard for both drivers and pedestrians.

Speaking from the public gallery, the former mayor said the condition of the roads was “disgraceful”.

He said: “Because we are in the middle of the winter period at the moment, potholes are arriving quicker than we can deal with them. We have criteria based on the size and depth of the pothole and what kind of road it’s on, which dictates whether it’s dealt with within a few hours or 28 days.”

Once potholes are identified, they are marked to indicate their repair priority. Those that are more than 4cm deep and/or 15cm wide are categorised as needing “urgent” attention.

Michael Herriot, of Haywards Close, said he had reported potholes as long ago as November and was then notified that they had been fixed when they hadn’t been.

He added: “I’ve had an email saying the FixMyStreet website isn’t working properly and it’s being reviewed.”

Cllr Nimmo Smith replied: “FixMyStreet is not a seamless operation and there are too many manual bits in it. We are making it smoother and it will be fixed before Easter.”

Ken Arlett, of Elizabeth Road, said potholes repaired by the council’s new “dragon ”, which has an articulated arm that shoots out a jet of flame, had already started to disintegrate. Cllr Nimmo Smith unveiled the machine in Henley in October, saying it could repair damage in a few hours that would take a gang of workmen days and cost £10 per hole as opposed to £70.

Mr Arlett, who is also a former mayor, said: “Fifteen per cent of the repairs gone missing in the last month. Are these contractors being paid for poor workmanship?”

Cllr Nimmo Smith said the machine couldn’t pour tarmac to the edges of the holes, meaning that some of the chippings that were applied on top were washed away.

Councillor David Eggleton said: “St Mark’s Road is appalling and if that’s what the dragon patcher does it’s a waste of money.”

In April last year, the county council was awarded £1.03 million by the Government to fill an estimated 14,500 potholes across Oxfordshire. As a result, there has been no cut in funding for roads in the council’s latest budget.

Cllr Nimmo Smith said: “There’s no way it’s enough but it means there will be no cuts for roads.”

Councillors also discussed plans for a pinch point to slow traffic in Gravel Hill. The county council is consulting on proposals for a narrowed portion of with priority for traffic heading up the hill as well as a pedestrian island and flashing speed signs.

Mrs Phillips asked why these improvements were being paid for with money originally earmarked for a zebra crossing in Greys Road.

Cllr Nimmo Smith replied that about £50,000 had been put aside by the town council for improvements to roads with £20,000 being allocated for the works on Gravel Hill. The zebra crossing in Greys Road would cost about £30,000.

Councillor Simon Smith added: “No one could agree where that crossing in Greys Road should go. Some people wanted it at the top, some at the bottom and it was never definitively stated where it should go.

“Gravel Hill was identified as a more dangerous crossing point than Greys Road at that time and that’s why the money was moved.”

To report a pothole, call 0345 310 1111 for urgent repairs or visit www.oxfordshire.gov.uk/cms/content/potholes