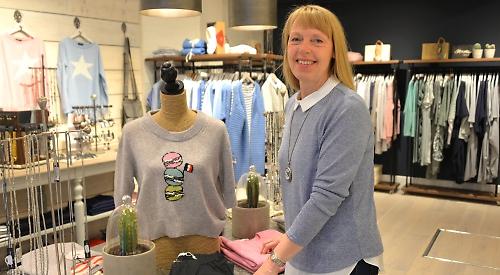 VH & Co has taken over the former premises of Hubbledays in Duke Street, next door to homeware shop Vinegar Hill, its sister business, which opened at the old Browns of Henley premises in 2015.

The shop is the family-owned company’s third womenswear store in the UK with the others in Stratford-upon-Avon and Cheltenham.

The branch is managed by Gill Novak, who used to run the Rive Gauche fashion store in Hart Street before it shut in 2015.

Mrs Novak, 60, of New Street, Henley, said: “There’s really nothing like this here. We have all the big chains but a new independent business like this hasn’t opened in many years. They’ve all been closing, which is very sad.

“This offers a broad range of items at varied prices and we hope to appeal to all ages. It’s also lovely working for a family business because we all have a more personal connection. It’s a more friendly and supportive way to work.

“We’ve had a very positive response so far. People have liked the shop as well as the variety of the clothes.”

Debbie Austin, who owns the business with her sister Beth and brother Richard, said the landlord of the premises invited her to move in when Hubbledays announced its closure.

She said: “It felt right so we thought we’d just go for it as we hadn’t opened a new clothes shop in six years. It’s a big step for us as clothing is a more competitive market. The refurbishment only took a month and I think it looks great. We were going for a clean, simple and utilitarian look and it has worked really well. It’s also great to see an empty shop back in use as it keeps the town centre looking vibrant.”

Hubbledays closed in August, a few months before its 20th anniversary.

Owner David Jack said the business was no longer profitable as he had lost too many customers to the internet while rent and rates were increasing.