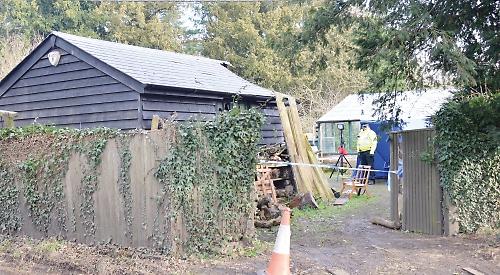 A WOMAN is in hospital with serious burns after a fire in which a man died.

The victim of the blaze in a wooden garden shed in Gravel Hill, Henley, has been named locally as Mark Sayer, 43.

He ran a landscape gardening business and is understood to have been married with young children.

Mr Sayer was trapped inside the blazing outbuilding. He was later declared dead at the scene.

The alarm was raised by a neighbour at about 4.45pm on Monday and six fire crews, police, an ambulance and paramedics were sent to the property opposite Friar Park Stables.

The Thames Valley air ambulance was also called out and landed at the stables.

Henley fire station manager Marcus Reay said: “Thames Valley fire control was called by a neighbour of the affected property who reported that an outbuilding was on fire and that they believed that someone could be inside.

“On arrival, the crews were faced with a severe fire in a large shed/workshop in a garden that was adjacent to a house, just off the road leading from Gravel Hill to Badgemore House.

“Unfortunately, a male who was in the shed was confirmed deceased at the scene. The ambulance crews helped a lady who had suffered from burns.”

Police said the 39-year-old woman had sustained serious injuries and had been taken to hospital, where she was in a stable condition.

Officers closed the road during the operation and it was not re-opened until almost 24 hours later as fire officers and police forensics staff investigated the cause of the tragedy.

The shed windows were smashed by the heat of the flames and the inside was charred and part of the roof was missing.

Mr Reay said: “Investigations are yet to be concluded, however the incident is not being treated as suspicious.

“I would also like to thank all the emergency responders from Thames Valley Police and South Central Ambulance Service who attended this incident and worked hard to provide support to the family.

“Our thoughts are with the family during this tragic time.”

A spokesman for the South Central Ambulance Service said: “We sent an ambulance and the air ambulance to the scene and two of our officers went in rapid response vehicles.

“Unfortunately for the patient inside the outbuilding, nothing could be done.”

Gravel Hill was closed until about 4pm on Tuesday and traffic was diverted via Paradise Road and Greys Road.

Bam Davis, from Henley, said: “Rip Mark Sayer, love you, mate. Such fun playing pool with you over the years, great guy to talk to — top guy who told me just how much he loves his wife and kids. Will never forget the fun times we had.”

“Second Mark I know taken too early this week. Hard to comprehend why some good people get taken and much evil is left.

“Keep being good people; I’m raising a glass and missing old school mates and, in my own non-religious way, praying for Mark and his family.”