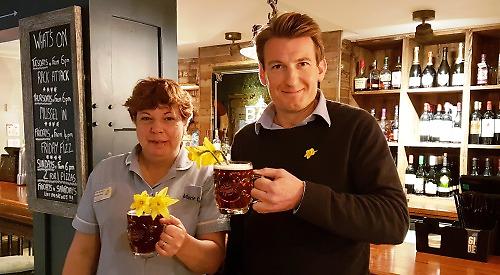 Hostelries across the firm’s 130-strong estate will be selling daffodil badges and some will be taking part in the Wear It Yellow initiative in which staff and customers will wear yellow clothes in return for donations.

The partnership is part of the annual Great Daffodil Appeal, which raises awareness of the charity’s services and money to care for people with terminal illness and their families.

Its target sum will fund up to 3,750 hours of nursing care.

Earlier this year, Brakspear donated more than £50,000 to the Sue Ryder hospice at Nettlebed following a 15-month drive, which was its first company-wide charity partnership.

Its chief executive Tom Davies said: "We're delighted to be supporting Marie Curie. Our pubs only succeed if they are part of their local communities, and what better way to support those communities than by raising money for a charity that touches so many lives?

“Our target sum of £75,000 will make a huge difference to the lives of people living with a terminal illness and their families.

"We've set ourselves a more ambitious fund-raising goal than last year but it's one we can definitely achieve, if not exceed, and I look forward to seeing how our pub teams get behind this worthy charity."

Marie Curie nurse Michal Plumridge, who worked at Brakspear’s Leathern Bottle in Lewknor for more than a decade, said: “I was really pleased to hear of the new partnership. It's just amazing that they will help more nurses like me care for people living with a terminal illness and their families.”