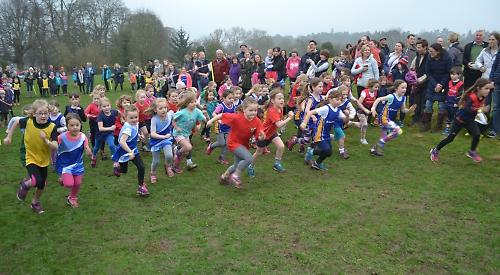 HORDES of children chased a stuntman around a cross-country course at the launch of this year’s Henley Youth Festival.

Gary Connery acted as the “March hare” for the runners, who were all from local schools, at the Go Kids Run event at Swiss Farm on Saturday.

Connery, from Albert Road in Henley, set the pace for two of the races while the other hares included Tom Le Beau and Arthur Unwin, both aged 11, from Moulsford School, and Georgina Ashby, 12, from Gillotts School.

A total of 185 children took part in the fun run – more than double the number who took part last year – and there were races for boys and girls in school years one to six.

There was also a warm-up led by children’s entertainer Darren Hillier, known as Bertie Slippers and every child received a medal, which was sponsored by Higgs Group, publisher of the Henley Standard.

Later on Saturday the festival’s annual gig night was held at the Lovibonds Brewery, off Greys Road car park in Henley.

Six acoustic acts, five bands and a DJ took to the stage, all supported by a professional sound engineer.

Several of the performers, including James Grundy, 17, of St Andrews Road, Henley, made their debut at the event.

Lucy Day, 15, performed songs by Joni Mitchell, Ed Sheeran and Elvis while her father, Graham, accompanied her on guitar.

Dozens of spectators attended the event, gathering inside by the stage to watch the acts or sitting on benches outside with food and drink. Many also recorded the performances on their phones.

On Sunday, about 115 school children took part in the festival’s annual junior proms event at Shiplake College – an increase from 60 participants last year.

They performed their favourite pieces in front of an audience of family and friends.

During a series of mini-concerts throughout the day, there was a range of music, including Brazilian drumming, string and wind groups, electric and acoustic guitars, as well as singers and instrumental soloists, including a French horn.

The theme of this year’s festival is “journeys” and there has been a record number of entries to this year’s writing, art and film competitions.

The festival, which is run by more than 60 volunteers and offers about 2,500 children the opportunity to take part in sporting and arts activities, is now one of the largest festivals in the UK.

Other events include children’s artist Dr Brian Squabbles and his Red Van holding a free event in the Market Place on March 18 from noon until 3pm. Art in the Square, which will encourage children to create their own imaginary worlds, is open to anyone and does not require pre-booking.

For a full report of all the events at the festival, see this week’s Henley Standard.