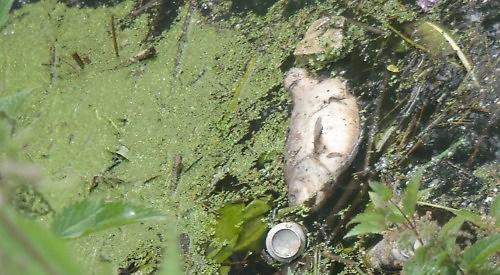 THAMES Water has been fined a record £20million for dumping tens of millions of litres of sewage into the River Thames.

Hundreds of fish and birds died between 2013 and 2014 when "out of control" treatment centres owned by the company, including one off Marlow Road in Henley, discharged 1.4 billion litres of untreated water into the river and its tributaries.

The firm, which pleaded guilty to 13 breaches of environmental laws, was fined £1million for the leaks at Henley plus £9million for failures at a site in Aylesbury, £8million over a site at Little Marlow and £800,000 each for similar offences at Didcot, Littlemore and Arborfield.

Passing sentence at Aylesbury Crown Court today (Wednesday), judge Francis Sheridan said: "The fact that Thames Water takes its name from the River Thames does not make it their property to poison and pollute."

The penalty is the largest in Thames Water's history, exceeding its previous £1million record for polluting a section of the Grand Union Canal in Hertfordshire. This was imposed last year.

The latest failing also affected the River Loddon, River Wye and the River Thame, a tributary of the Thames.

Prosecuting for the Environment Agency, Sailesh Mehta told the court that toxic levels of ammonia were detected in the Thames near the Henley site and 50 dead fish were later seen floating on the surface.

Elsewhere on the river, a crayfish fisherman had to lay off his staff for three years and a young sailing student developed a severe stomach bug after coming into contact with raw sewage.

Condoms, tampons and sanitary towels were seen floating along the Thames and one site was failing to remove babies' nappies from the flow. An entry in the workers' logbook at the Aylesbury site said it was a "disaster waiting to happen".

Judge Sheridan told the court that the fine had to send a message to Thames Water's shareholders. He said: "140 million tons of excrement straight into the river is unacceptable. It doesn't get much plainer than that."

"The environment is to be cherished and protected, not to be poisoned and polluted."

Richard Matthews QC, defending, told the judge that Thames Water retains 81 per cent of its profits and is set to invest four billion pounds in infrastructure between 2015 and 2020.

Afterwards, its chief executive officer Steve Robertson said: " “We deeply regret each of these incidents. It is clear that our performance in this part of our region, at that time, was not up to the very high standards that we and our customers expect.

“Since then we’ve reviewed how we do things at all levels and made a number of key changes. These have included increasing the numbers of staff in key operational roles and investing heavily to improve reliability. As a result, our performance has significantly improved.

"We understand our huge responsibilities to the environment, have learned from these serious events, and continue to invest at the rate of around £20 million a week on continually improving our service.”

Steve Robertson added: “We will be holding open days at each of these sites later this year so our customers and stakeholders can see the improvements we have made and speak to the operational teams who work hard to maintain high standards at the works."

The company will also add £1.5 to its community investment fund for projects to improve the river and its surroundings near the affected sites.