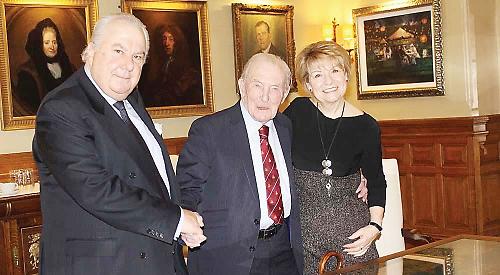 THE last surviving member of the Dambusters visited Phyllis Court Club in Henley.

George “Johnny” Johnson, who is 95, unveiled a display of colour photographs of Dambuster models.

The models, which were used to brief the bomber crews prior to the raid on the dams on the River Ruhr, were made in the club ballroom in April 1943.

The models were found by Philip Nugus, a member of the club, who invited Mr Johnson to speak about
them and the part they played in preparing for the Allied attack by a Lancaster bomber unit led by Wing Commander Guy Gibson in May 1943.

About 120 guests attended the unveiling ceremony.

Mr Nugus said: “I was determined, once we had located the models, to produce colour photographs, then these framed images could be returned to within yards of where they were created.” He had help from the Imperial War Museum to retrieve and photograph the models.

Patricia Christmas, chairwoman of the club, said: “It is an important event for Phyllis Court Club as the photographs will be presented just yards from the ballroom where the models were originally created by the RAF.

“We recognise the importance of this as we remember the 53 air crew who did not return. The raid helped to turn the tide of the war.”