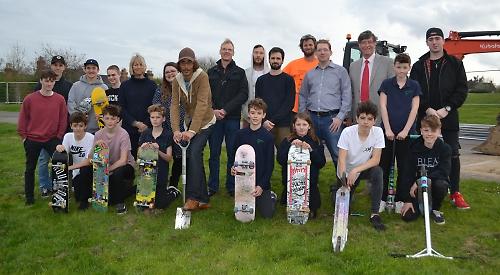 Security fencing went up on Monday and diggers are on the site at Makins Recreation Ground, off Greys Road.

Maverick Industries, of Dorset, will build the facility and it is hoped it will open in early August.

The new skate park, which has been planned for six years, will have sunken concrete obstacles rather than hollow, metal ones and will cater for BMX bikers, skateboarders and roller-skaters. It will replace the original skate park, built in 2004.

Colin Brathwaite, chairman of the Henley Skatepark Initiative, said: “It’s all a bit hard to take in at the moment actually. Thousands of hours of work, thousands of emails, hundreds of meetings, hours pouring over reports and funding applications.

“Obviously I’m extremely pleased. I think it will all really sink in once it’s finished and I can stand back and watch people enjoying it.”

Mr Brathwaite said they still needed to raise the remaining £15,000 and in the meantime had borrowed this amount so that construction could begin.