Honey beer returns to help save our bees 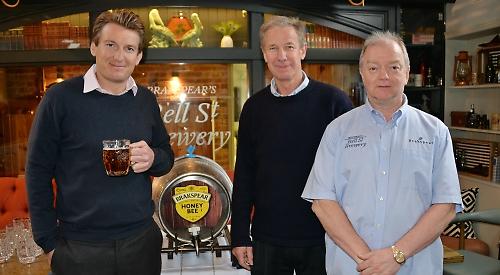 BRAKSPEAR is to sell a limited edition beer brewed with honey for charity.

The Henley pub operator and brewer officially relaunched Honey Bee at the Bull on Bell Street, which is next to its head office, on Tuesday.

The 4.4 per cent alcohol concoction will be sold in several of Brakspear’s Henley pubs from tomorrow (Saturday) and across its entire estate throughout May.

Every pint sold will raise 10p for Friends of the Earth’s Bee Cause campaign, which aims to protect the insects from growing environmental threats.

Honey Bee was created by Brakspear’s head brewer Malcolm Mayo in 2015, when it was sold throughout Henley for about a month in aid of the campaign.

It was so successful that the company is now trialling it on a wider basis and could introduce it as a regular seasonal beer.

The ale uses about 20kg of honey, some of which is provided by bees kept at Orwells in Shiplake, for every 654-litre batch. This is added after the beer wort and hops have been boiled.

Honey Bee will initially be brewed at the Bull’s micro-brewery but production will move to the Marston’s Wychwood Brewery in Witney to increase supply.

Mr Mayo said: “There was a bit of a learning curve when we started making it as we were learning to work with honey. You have to get just the right amount so the hops don’t overpower it but it isn’t too sweet either. I’m very happy with the recipe now and think it’s going to be very popular.”

Brakspear chief executive Tom Davies said: “We’re very proud of Honey Bee and delighted to be continuing the partnership with the Bee Cause.

“Brewing a honey beer and supporting the campaign are both natural choices for Brakspear. Not only do we have a bee in our logo but most of our pubs have gardens or floral displays that depend on bees.”

The company first supported the campaign in 2014 by encouraging landlords to grow bee-friendly plants.