Grandfather scoops On Your Bike prize 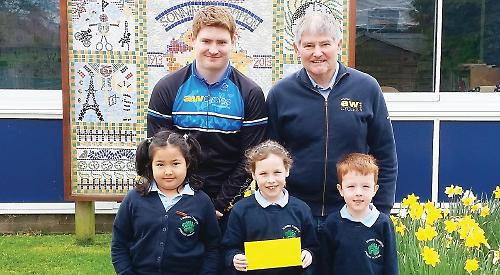 A GRANDFATHER won a new bicycle in this year’s Sonning Common On Your Bike draw — but he’s not going to be on it for Sunday’s ride.

He has taken part several times before as the event raises money for the village primary school, where his daughter Reike Fox is a teacher.

Mr Tyldesley’s name was first out the hat when the draw was made at the school in Grove Road on Monday by pupils Miley MacNab, seven, and Isaac Davis, six.

His prize was a new bike from event sponsors AW Cycles, of Caversham.

The second prize of a £100 voucher for the shop was won by eight-year-old pupil Evie Gainsford. Mr Tyldesley said: “I was extremely surprised to win. I have to say I thought it should have gone to a youngster rather than me.”

He said he was going to take his time before choosing what sort of bike he wanted, so he would be riding his current machine on Sunday.

Hundreds of cyclists are expected to take part in the 11th annual event.

Meanwhile, a new bike shed has been created at the school. It is in an outbuilding which used to house the oil-fired heating system until that was replaced by a gas system last year.

It is now used to store staff and children’s bikes and scooters after AW Cycles donated the racking.

Headteacher Chris Hurst said: “It fits with the school’s philosophy to reduce, reuse, recycle and repair.”