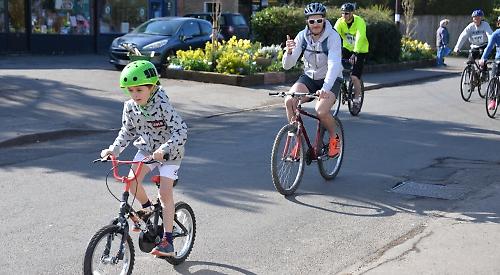 RECORDS were broken when scores of families took part in this year’s On Your Bike challenge in the sunshine on Sunday.

A total of 599 riders — the largest total in the event’s 11-year history — gathered at Sonning Common Primary School for the start of a ride of either six, 12 or 20 miles.

They ranged from small children to grandparents and were joined by more than 100 spectators.

Together, the cyclists raised a record total of more than £6,000.

Event founder Penny Snowden, who completed the 20-mile route, said: “It was a stunning turnout on a beautiful spring morning.

“The enthusiasm of all who took part and the fantastic crew who organised, marshalled and cooked ensured it was the best event we have ever staged.”

The cyclists were set off from the Grove Road school by village GP Dr Andrew Burnett, who is retiring from Sonning Common Health Centre after more than 30 years.

He staggered the starts to prevent the roads becoming overcrowded and even called back several over-enthusiastic riders who set off too soon.

The cyclists on the shortest route rode through Kidmore End, Gallowstree Common and Peppard before returning to the school.

Those on the 12-mile route also took in Checkendon and Stoke Row while the 20-milers went as far as Nuffield and Ipsden.

Some riders rode tandems while others had a special seat on the back of their bike to carry a small child.

Many children took part on their own bikes and some completed the 20-mile route, including 11-year-old Rhys Beaumont, of Greys Road, Henley. Rhys, who has been doing the longest ride with his brother Owen, 13, since he was seven, said: “You do have to pace yourself. Most of it is straight roads but there is one long. straight hill that’s really hard!”

Oli Warren, 14, from Sonning Common, said: “I’ve been taking part since I was eight and it’s great fun. You have to take it nice and slow the whole way round.”

His father Phil added: “We have had rainy days before but we’ve been really lucky this year.

“It’s really good to get everybody together. Oli is now at Chiltern Edge School so it’s a nice way for him to meet up with old friends.”

Peter Woolsey, 76, from Binfield Heath, was persuaded to take part by Dr Burnett only the day before.

Mr Woolsey, who rode his  40-year-old classic Peugeot bike, said: “I’ve never done this before but when I was 10 my father had the wonderful idea of cycling from Manchester to Dorney Reach and we did it in three days.

“This was a gorgeous ride and if you go cycling you are probably less likely to need a doctor!”

Christopher Eames ran the six-mile route next to his daughter Chloe, six, on her bike.

He said: “I ran so I could push her up the hills.”

Chloe said: “It was good. I wanted to beat my sister and I did.”

Bronwyn Stoves, seven, who has taken part several times in a child seat or being towed, completed the six-mile ride on her own.

Other participants included author and Sonning Common parish councillor Tom Fort. Dave Tyldesley of Woodlands Road, Sonning Common, took part with his son-in-law John Fox and granddaughters Lara, four, and Tess, two. He had won this year’s On Your Bike prize draw with a prize of a new bicycle from event sponsors AW Cycles, of Caversham, although he wasn’t riding that.

Vanessa Tomlin and Sarah Blundell used the event as training for when they take part in the London to Brighton Cycle in June.

They were joined on the longest route by On Your Bike debutants Jon Blundell and 13-year-olds Katie Blundell and Michael Edwards.

Dozens of smaller children took part in a fun bike ride around the school playground.

The proceeds will be split between the school, the Sue Ryder hospice in Nettlebed and the accident and emergency department at the Royal Berkshire Hospital in Reading.

Chris Hirst, headteacher of the school, said: “On Your Bike has been running for quite a few years and always raises a lot of money. The number of cyclists has been increasing year on year and it’s a fantastic event for former pupils, people in the community and kids who come to the school.

“Even last year, when we had a touch of rain, there were lots of riders as people come along for the event, not the weather.

“It’s a good event for the school in terms of the money it raises but also the community, with children and adults cycling together.”

On Your Bike is organised by the school and its parent-teacher association in partnership with the health centre.

It has now raised more than £40,000 for various charities since it was launched in 2007. The event is sponsored by Higgs Group, publishers of the Henley Standard, estate agents Beville, baby food manufacturer Ella’s Kitchen, of Rotherfield Greys, software firm Halarose, Peppard Building Supplies and AW Cycles, Jennings butchers, One Garden supplies and Lift Creative Communication Design, all of Caversham.