Another boost for independents 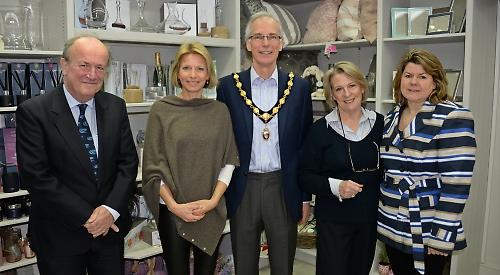 A NEW gift, homeware and clothing store has opened in Henley.

The shop sells a range of goods including glassware, cushions, greetings cards, picture frames and candles by Charles Farris, which are one of the Queen’s favourite brands, as well as women’s tops and cashmere sweaters for men and women.

Mrs Russell, who lives in Bell Street with her husband Christopher, used to run similar shops in Cambridge but has been working as an interior designer since 2004. The couple moved to the town about seven years ago.

Mrs Harrow, who is originally from Denmark but now lives in Blewbury, is married to Mrs Russell’s son Rupert Harrow and recently returned to the UK after spending 16 years in Hong Kong, where she ran a number of businesses.

Mrs Russell said independent stores were important to Henley. “Marlow has really developed itself with a series of independent boutiques and we should be doing the same thing here,” she said.

“I feel passionately about independent shops in town centres. They are the lifeblood of a town and provide a greater degree of individuality and choice than the chains.

“We will strive hard to help in any way we can for the betterment and success in Henley.

“The town always looks lovely with all its floral displays though it could do with a few more trees. We want to be actively involved in the Henley community and I’m particularly keen to play a part in cleaning the pavements as they’re often in quite a poor state and they should be improved to attract visitors.”

Stock opened with a “soft” launch two weeks ago and Mrs Russell said trade had been good.

She said: “It’s great to be back in retail. I think the shop looks amazing and we’ve had lovely comments and really good sales, which hopefully will continue.

“This unit is in a very good position to get a healthy amount of footfall and the unit is exactly the right size, so we thought it was perfect for what we had envisioned.” Henley town manager Helen Barnett, who attended the official launch by Mayor Julian Brookes, said: “I’m delighted to have such a wonderful, experienced retailer in Henley and I hope that people will support it.”

Councillor Brookes added: “It’s good to see a new shop open but just as importantly it’s an independent boutique, which is the right kind of shop for the town.”

Chilton Watson closed in the autumn, blaming the decision on the threat of a rent increase of more than 30 per cent.