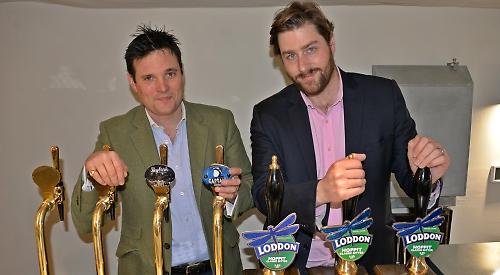 DOZENS of villagers attended the official re-opening of the pub in Binfield Heath after more than three years.

The Bottle and Glass Inn is now run by landlords David Holliday and Alex Sergeant, who have signed a 20-year lease on the building, which has been refurbished and extended by the Phillimore Estate.

The pub closed in November 2013 following a quick turnover of landlords and was then bought by the estate from Brakspear.

The Grade II listed building now has a two-storey rear extension which houses a 70-cover restaurant while the old part of the pub has a “locals” bar with pews, benches and standing room.

As part of the redevelopment, the car park has been moved to the rear and an “infill” three-bedroom house built.

Mr Holliday, 36, who lives in Wargrave, and Mr Sergeant, 31, from Pinkneys Green, have spent £250,000 furnishing and fitting out the pub.

The objects on display include the old pub sign.

The launch party on Wednesday evening last week was attended by Lord and Lady Phillmore and their son Tristan and his wife Jemma, who met at the pub in 2011.

Mrs Phillimore, who had a go at pulling pints behind the bar with her mother-in-law, said: “The pub has been closed almost ever since we met so it’s so exciting to see it open and full of life again. We absolutely love it.

“It has been a really fun project and David and Alex have done a great job of putting their own touches to it over the past few weeks.

“It was very important that we got the right balance between modernisation and keeping the spirit and character of the listed part of the building.

“We stripped the black paint off the oak beams, which makes it look much more traditional and has really opened up the space to give it a lighter feel. The new area allowed a modern kitchen to be installed while the dining area is more spacious and more suitable for families and groups.

“There’s been so much excitement about the re-opening. I can’t even walk into the village shop without people asking when we’re opening again.”

Mr Phillimore said: “We’re thrilled that the pub’s back open for the community — that’s the reason we bought it. We wanted to see it thriving and to give something back to the village.

“There used to be four pubs in Binfield Heath but over time it dwindled to none so we felt it was very important to get it open and look forward to David and Alex making it a great success.”

The pub will serve beer from the Loddon Brewery in Dunsden, which is also on the Phillimore Estate, while its menu will include Oxfordshire wood pigeon, estate fallow deer chop and cheeses from the Nettlebed Creamery.

Over the next few months, the landlords hope to refurbish the thatched outdoor seating areas and to start growing their own vegetables. Mr Holliday, a former head chef at the Pot Kiln pub and restaurant in Frilsham, near Newbury, said: “It’s great that there’s been so much interest locally.

“The pub looks amazing and it’s great that we have the space for a food-led operation while keeping the pub element.

“People will always be able to pop in for a pint while the restaurant will hopefully attract people from further afield.”

The old pub was run by Graham and Jill Hughes until April 2013, when they left, saying they had lost £35,000. Anthony Eden, a former Goring parish councillor, then took over but left seven months later.

Binfield Heath Parish Council registered the pub as an asset of community value before the Phillimore Estate purchased it.