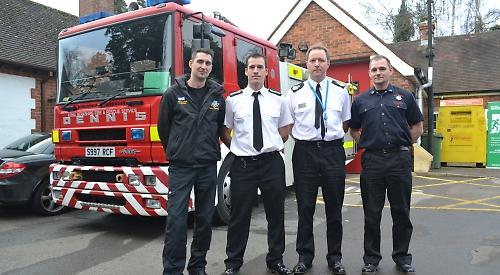 THE future of Wargrave fire station appears more uncertain following public consultation on cuts to be made by the Royal Berkshire Fire Authority.

The retained station in Victoria Road may be closed under proposals to save £2.4million across the service by 2020.

In the consultation, residents across Berkshire were asked to respond to seven possible cost-
cutting measures to save £1.4million initially. Three of these included closing Wargrave fire station.

The results, which were published on Friday, showed the most popular measure was option one, which is to close Wargrave and Pangbourne fire stations as well as abolishing the retained support unit and remotely managing three other stations.

More than 1,000 people responded to the consultation through surveys, email, phone and writing, including more than 245 from Wokingham borough.

The results will be considered at a meeting of the authority on Tuesday, although fire chiefs stressed that the final decision would not be based solely on the popularity of the options. Deputy chief fire officer Trevor Ferguson said: “The authority has a statutory duty to consult and conscientiously consider responses.

“Members will take these views on board but balance them against their own judgement and make what they believe is the best decision for the community of Berkshire.

“After the decision there will follow an implementation plan which will require certain elements of consultation.”

West Berkshire district councillor Emma Webster, a member of the fire authority, added: “We have been taking this information and the information from drop-in sessions to understand people’s thoughts.

“We need to make sure we take on board all the opinions expressed.

“This isn’t a referendum, the one that gets the highest number of votes is not necessarily the one we will pick. It was a very large level of response compared with previous consultations and we are grateful for that.

“One of the things we were very keen to stress is that this was not done so it would put anyone at risk. There will still be fire cover but maybe just from a different place to where people would expect.

“Retained crews are not always available and when they aren’t they are covered by full-time colleagues.”

Mr Ferguson said the questionnaire had been carefully worded and explained at public events to make sure residents knew the impact of the choices.

He said: “We know this is a very complex area but the authority has been really insistent that this consultation should give members of the community a face-to-face chance so we went to these communities and met residents.”

Last month, Wargrave Parish Council said it would like to see the village fire station stay open after receiving requests from villagers to fight for its future.

A 240-strong petition calling for the station to stay open was submitted to the fire authority ahead of the consultation deadline, while seven staff at the station wrote a letter outlining its importance to the community.

Parish clerk Stephen Hedges said many residents were concerned about how quickly fire engines would reach Wargrave from other stations such as Maidenhead and Caversham Road in Reading.

Chairman Richard Bush recallled how firefighters from Wargrave had come to his aid during incidents at Gibstroude Farm in Crazies Hill, which he owns.

In an open letter to locals, John Halsall and Bob Pitts said the station housed a vital NHS responder unit, which responds to 20 to 30 calls per month and generates valuable income for the fire service.

They also claimed the station was cheaper to run than some of the others threatened with closure.

Cllr Halsall said: “I’m disappointed to hear the results of the consultation. I feel it was skewed towards certain groupings which weren’t necessarily consistent.

“The savings which would be made by closing Wargrave station are immaterial compared with the allowances paid to councillors.”

The station has historically had problems recruiting firefighters and nearly had to close in 2014 after two-thirds of the crew left in two years.

This meant that if one of the remaining four retained firefighters resigned, the station would no longer be allowed to respond to 999 calls and could be forced to close.