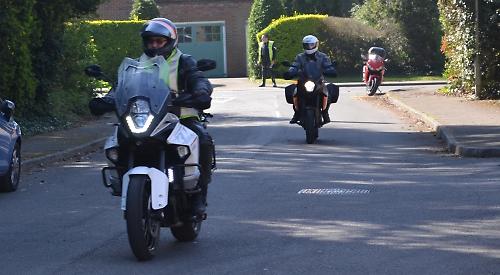 A GROUP of motorcyclists delivered Easter treats and a donation of £600 to a charity in Henley.

About 15 members of the Chilton Motorcycle Club rode from Thame to the Chiltern Centre for disabled children, off Greys Road, on Sunday.

The motorcyclists presented a cheque and handed over some Easter eggs and toys as they met some of the children who use the centre.

The club, which is based in Tetsworth, has been associated with the charity for more than five years and the Easter run is an annual event.

The money was raised with a barbecue, a jar on the bar at Wallingford Boat House and through donations on the day. Neil Woodcock, chairman of the club, said: “We are always pleased to be able to support the Chiltern Centre because it’s a very worthy charity.

“We used to support a hospice in Oxford but it became a bit too corporate so for the last five years or so we’ve been supporting this instead.”

Pamela Lee, an administrator for the charity, said: “The motorcyclists are really are part of the family here now. We always look forward to their visit, which is particularly good for the young people.”

After their visit, the motorcyclists went on to Wallingford for lunch.