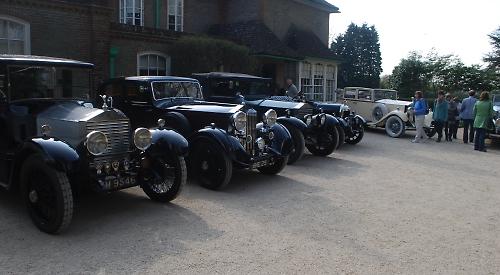 VINTAGE Rolls-Royces with a combined age of more than 800 were on display at Nuffield Place, the former home of the Morris Motors founder.

The vehicles, which all date from before the Second World War, were parked outside the country house on Thursday last week as part of an owners’ club meeting. They included a Ghost from 1915 and other models from the early Twenties.

The meeting was arranged by Tim Corbishley and also involved the drivers having lunch at the King William pub in Ipsden beforehand.

Mr Corbishley, from Checkendon, had planned to take his 1923 20hp on the day but it failed to start in the morning.

He said: “I’m a Rolls-Royce owner but I’m the only one here without my car. We decided to have a little car meet so I phoned up everyone I know with pre-war cars. There is nothing here newer than 1935. I’m very pleased with the turnout. We have lots of meetings but they are usually with people who have modern Rolls-Royces.”

Dave Avery, from Mapledurham, brought a white 1934 20/25 model, which was originally built for a Mrs Vandenberg, of North London, and later owned by Alan Geater.

Mr Avery, who uses the car for wedding days, said: “I’ve had it for nine years. I bought it from Alan who did more than 300 weddings with it. I took his granddaughter and grandson to their weddings in it.

“Tim invited me because he loves classic cars. They are all wonderful, except mine’s the only dirty one!”