Restaurant set to change name and appearance in rebrand 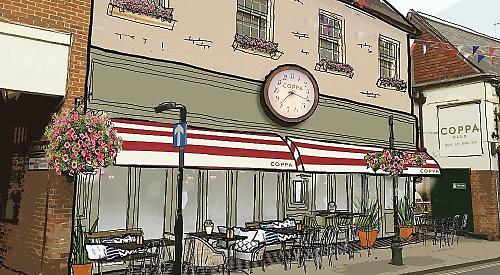 A RESTAURANT in Henley is set to be rebranded.

Plans have been drawn up to convert Strada in Bell Street into a branch of Coppa Club.

Strada Trading, which owns both brands, wants to change the frontage and side entrance and to install new signage.

The restaurant would become the fifth branch of the Coppa Club, which was launched at the Great House in Sonning in 2014. The company’s planning application says the frontage and fascia board would be painted sage green and the existing canopies would be replaced with striped ones.

The side entrance would have a single glazed door with a fan above and glazed panels either side plus metal lettering and another wall lamp. “The proposed changes are associated with the rebranding of the restaurant,” says the application. “This will secure employment and improve the restaurant’s contribution to Henley town centre.

“The result will be an attractive new shopfront that can be opened up during pleasant weather, which will enhance the vitality of Bell Street.”

Strada opened in 2008 and is one of 33 branches nationwide.