Couple escape as blaze rips through shop next to home 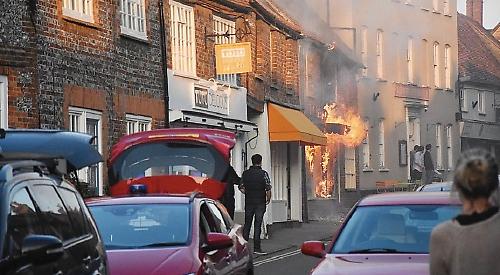 A COUPLE’S business and home were wrecked when a fire ripped through a building in Watlington town centre.

The blaze broke out at DG Homecare in High Street on Friday evening while Derek and Glennys Starling were at their house next door.

Residents reported hearing a bang as flames leapt out of the building and a pall of dark grey smoke hung over the street.

Passers-by helped the Starlings out of their house via a side door of the shop before firefighters arrived.

The couple are now staying with their daughter in Henley. Mr Starling was reportedly recovering from a stroke that he suffered at the end of last year.

The hardware store was gutted and the couple’s home damaged and the building has been boarded up and fenced off. The cause of the fire is being investigated but it is believed to be accidental.

The alarm was raised at about 7pm and more than 50 firefighters from Oxfordshire and Buckinghamshire tackled the blaze at its height.

The crews wore breathing equipment and used jets to stop the fire spreading to neighbouring properties.

Dave Parkes and Minako Sato, who live opposite the shop, said the fire spread quickly.

Mr Parkes said: “It was fierce by five past seven. People were beginning to panic. The flames were coming out of all the windows and it was out of control for a while.

“People were knocking on the doors trying to get the people in there out, which took quite a while. They were banging on their front door and were running around the back and then they came out of the side door. A member of the public got them out.

“The owners came into our house and because he’s recovering from a stroke we got him to sit down. He was a bit upset but was calm actually.”

Mrs Sato said: “We got them to speak to the fire people because there were gas cylinders in various places in there but most of the big ones are kept round the back so they were okay.”

Desmond Kearney and his wife Val were at their home in High Street when the blaze broke out.

Mr Kearney said: “The front of the shop was a fireball and at the back of the house the flames were licking out from the roof.

“It was really on fire, the whole thing, I’ve never seen anything like it. The fire brigade did a fantastic job.”

Amanda Hinton, who runs K is for Kitchen, also in High Street, was at her home behind the business when the fire started.

She said: “We were just sitting down having dinner when we heard a bang. We thought a car had crashed and went to look outside. There were flames pouring out the front of DG. The flames were huge and were shooting halfway across the road. There was a lot of smoke.

“There were lots of people gathered on the street watching and then the ambulance service arrived and they cleared everybody away.

“The Social, the restaurant which is in the building next door, were doing teas and coffees for the firefighters through the night.”

Sallie Sayers, who lives off High Street, said: “The flames were coming out of the roof — it was quite frightening. You know a fire is devastating but it’s the speed at which you see a little bit of smoke and then suddenly it’s huge plumes of black smoke and flames leaping out of the building.

“We felt safe when the firefighters got here — they were so calm.”

She said the whole town felt “very, very sorry” for the Starlings.

Peter Robinson, who also lives in High Street, said: “It was fairly dramatic. We were told to stay inside and close the windows, which we had already done. I think we were just all very concerned for the occupants, for the business and whether the fire might spread because these are all fairly old buildings.”

He added: “The Starlings are super folk, they really are. The shop was an absolute treasure trove — I would almost say irreplaceable. You could get everything from mole traps to light bulbs. Their staff were so helpful.”

Robin Holmes-Smith, who runs the Granary Deli in High Street, said the couple were lucky to escape.

“For them personally it must have been absolutely terrifying,” he said. “To probably lose your house and business in one go, you can’t think of anything worse really.”

Firefighters were still at the scene in the early hours of Saturday and High Street remained closed during this week.

Marcus Reay, the incident commander, said: “I was very proud of my firefighters who worked tirelessly to bring the fire under control. Fortunately, there were no casualties.”

A meeting of Watlington Parish Council this week heard that attempts will be made to save the building.