Brakspear boss behind the bar for good cause 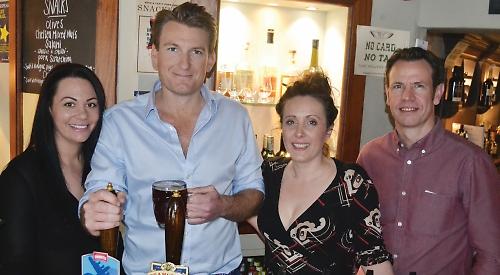 TOM DAVIES got back behind the bar for the first time in about 15 years to raise money for charity.

The chief executive of Henley pub company Brakspear put in a two-hour shift at the Little Angel in Remenham — under the watchful eye of landlord Douglas Green, a friend for whom he once worked.

Tom started his hospitality career as a barman while studying for a master’s degree in business in Edinburgh.

In his early twenties he learned about the trade by working at a number of London pubs including the Coat & Badge in Putney, which was owned by Geronimo Inns, for whom Douglas was area manager.

In 2007 Tom joined his family’s firm of J T Davies, which bought W H Brakspear the same year, and in 2010 he was appointed chief executive while his father Mickey became chairman.

On Thursday evening last week, he was pulling pints once more after being “bought” by Douglas at a charity auction last year. For every pint he sold £1 went to the Sue Ryder hospice in Nettlebed and a total of £150 was made.

Tom said: “It was good fun to be back at the bar with Doug barking instructions.

“I just about remembered the ropes. Once I worked out where everything was it seemed to come back to me reasonably quickly. I was fairly confident but I’m not quite as quick as I was. It was good fun and I was looked after extremely well by the guys there, although I’m not sure they would offer me a job!

“I did end up having quite a large tab so that did dwarf the rest of it! I gave some drinks to local supporters who came down.

“If you’re working in the pub business it’s important to understand what they guys on the ground are doing so it’s something we’d like to do more of.”

Douglas made the winning bid of £1,500 at Brakspear’s annual awards dinner in October and Tom himself threw in another £700.

Douglas said: “Two hours work for that sort of money — it’s probably what he gets paid anyway!

“It was for a good cause which we had a bit of fun with and we had dinner together afterwards. I’ve got a lot of time for Tom and his father and it’s good to see him pulling a few pints.”

He recalled Tom working at the pub in London, saying: “In those days he was obviously being given an opportunity to learn the industry.

“He was very, very good at what he did as anyone is who can survive a few months at the Coat & Badge. Let me tell you, it was lively!”