Museum to open new gallery for community use 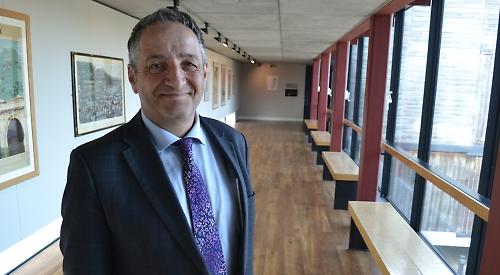 A COMMUNITY gallery is to open at the River & Rowing Museum in Henley.

It will be located on the glass-fronted bridge which links the Thames and Henley galleries and could be used to showcase the work of schools and community groups.

The Henley Bridge Gallery, as it is expected to be called, will host its first exhibition in either August or September.

Meanwhile, a Peter Rabbit exhibition, which the museum is developing in association with Penguin Books, will open in a children’s space within the River Gallery next month and will also use the Kirkham Gallery and the grounds outside.

And next year, the Kirkham Gallery will show work by major 20th century artists, starting in January with Barbara Hepworth followed by Henry Moore in the summer and Lucian Freud in the autumn.

Ludo Keston, chief executive of the museum, said the new gallery was for the benefit of the community.

“We want to be of more service to Henley,” he said.

“As an educational charity, we’re committed to bringing history and the arts to life and that means encouraging people to explore their own creativity as well as looking at other people’s.

“We wanted to have a space where we could exhibit work by other people or groups or things that are of particular interest to them.”

He said each exhibition would run for about a month and he anticipated high demand for the space, which measures 22m by 2.8m.

Mr Keston continued: “We’re on the cusp of our 20th birthday — 2018 is our anniversary year — and we’re planning a lot of new initiatives.

“A key part of that is to try to find out more from Henley about what Henley wants.

“Maybe Henley feels there are things that could be here that are missing, not necessarily from the museum but from Henley’s cultural life. If we can help with that then we will. Perhaps there are community groups who want to tell their stories or there are artists who we can’t display in our other galleries.

“We’re a charity and we exist only to serve the community of Henley.

“It is a space for groups to explore their own creativity, although we do need to be clear we’re not going to be able to take absolutely everything.

“We’re looking to provide opportunities for people who haven’t had their work shown in other places.

“We might, for example, choose to show an exhibition of A-level work from the whole of Oxfordshire. This is value added, not trying to tread on anyone else’s toes.”

Mr Keston added: “It’s quite right as we approach our anniversary year that we should rethink what we want to be in another 20 years’ time.

“The museum is recognised locally, nationally and internationally for the quality of its work and we’re particularly noted for our engagement with families and we want that to continue.”

l The museum welcomed about 110,000 visitors in the year to March 31, 2016 and says it contributed £1.9million to the local economy by people going to shops, restaurants and cafés.