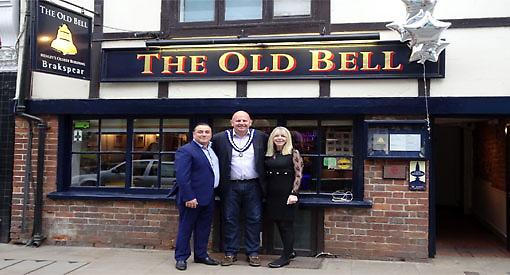 A HENLEY pub has re-opened after being closed for three months due to the sudden death of the landlord.

The Old Bell in Bell Street, which is owned by Brakspear, is now being run by Nuno Rosado and Ondine Carrington, who used to run the Ko-Ko cocktail bar, which is now the Bull on Bell Street. until Januiary 2013.

The couple have run Portuguese restaurant The Square in Henley market place for four years and last May opened the Al Forno restaurant in Reading Road. The pub, which has been redecorated and has a new bar area, was officially re-opened on Friday evening by Deputy Mayor Will Hamilton.

Ms Carrington said: “People seemed to find out through word of mouth and we had a fantastic crowd come in, which continued throughout the bank holiday weekend.

“It was definitely busier than we thought it was going to be but people do want to go and see a place with new tenants. We had lots of familiar faces from The Square and Al Forno and there were lots of tourists coming in as well.

“We have redecorated to make the place a bit brighter and we want to do some work on the garden.”

The pub closed in January after landlord Rob Myles-Hooton died suddenly after three years at the pub. He and his wife Pamela had planned to leave the pub and set up a vegan restaurant.