Children urged to dress up for new May fayre 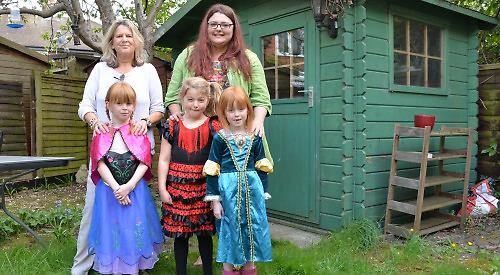 HENLEY’S new-look May fayre will include a children’s fancy dress competition.

Youngsters aged 13 and under are encouraged to attend the event on bank holiday Monday, May 1 in a costume of their choice for the chance to be crowned May King and Queen.

Entrants don’t need to register in advance but should just turn up in Market Place when the fayre opens at 11.55am. The judging will be conducted by Angie Best following a Maypole dance.

The winners will be paraded around the town centre in a rickshaw and will receive prizes from Mayor Julian Brookes.

Town councillor Sarah Miller, who chairs the fayre’s organising committee, said: “Children can wear whatever they like and I very much hope that they will get into the spirit of it.

“Everyone loves to dress up and I know my own kids can’t wait for it. We hope all the schools will get involved as the more who take part, the merrier.”

The fayre, which is sponsored by the Henley Standard, is to be held in the town centre for the first time in about 30 years.

It has been moved from Mill Meadows after Henley Round Table decided not to organise it any more.

There will be various stalls organised by local businesses and charities as well as face-painting, fairground rides and traditional games such as hook-a-duck, splat the rat and a coconut shy.

Councillor Miller said: “The preparations are going really well. We’ve got more than 20 stallholders on board and there’s a lot of excitement, not to mention speculation about how the weather will be on the day.

“The new town centre location should benefit local businesses and I’m hoping the fayre will remain there, though it will depend on feedback and what residents want.

“This year is very much about starting small and seeing how we can grow the event. We’re hoping that lots of people will show their support and that it will be even bigger and better next year.”

The fayre will also include a children’s storytime event for six- to 13-year-olds called Celebrity Jackanory, which will take place at a secret location from 12.45pm to 2pm.

Tickets are available by entering a competition at the town hall. Children must answer the question: “What is your favourite story or book and why?”

Entries must include the child’s full name, age and address and their parent/carer’s daytime telephone number and be submitted by Tuesday, April 25.

The organisers will select the best 30 answers and each winning child will receive a ticket for them and one adult to attend the event. Winners will be notified on April 28.