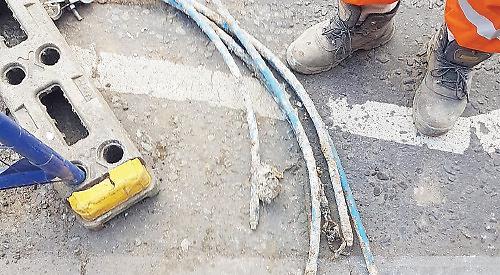 A ROAD closure which led to traffic chaos in Henley last week was caused by a “fatberg” formed by grease and oil from a nearby restaurant.

Hart Street was closed for four days after “defects” were found in a sewage pipe during routine work by Thames Water contractors.

It was originally thought that the sewer had collapsed but the Henley Standard can reveal that the problem was a fatberg, which is formed when a congealed lump of fat combines with other household waste.

The blockage is understood to have been created by a build-up of grease coming from steak restaurant CAU in Hart Street and ramrods which were inserted to try to clear the blockage became stuck.

The contractors closed the road on Sunday, April 8 so they could dig down and expose the pipe before breaking the fatberg into smaller chunks which could be removed.

They found the bent ramrods, which had been used to try to clear the blockage, still left wedged in the fat.

The whole length of the street was closed from Henley Bridge to Market Place until 6am on Thursday last week, causing long tailbacks and congestion throughout the town and beyond.

The disruption prompted criticism from traders in Hart Street who said their businesses had been affected, while residents and drivers complained about a lack of signage or measures such as rephasing the traffic lights.

David Nimmo Smith, a town councillor and cabinet member for environment at Oxfordshire County Council, the highways authority, blamed the restaurant for failing to inform Thames Water of the problem.

He said: “There was fat in the system and the people at the restaurant had been trying to get it out with rods. This caused the sewage to be blocked and I’m told it backed up into the basement of Café Rouge.

“The blockage has now been cleared but what I hope is that Thames Water, which has been inconvenienced, will take action against the
perpetrators.

“The restaurant is quite new and may claim that the fat was there before it arrived but I would expect Thames Water to make the appropriate remonstrations.

“The county council will be supporting Thames Water in doing that because we were inconvenienced by the road being closed, as were residents of the town.

“Rods were left in the system and Thames Water should have been notified rather than letting it build up to cause an emergency situation.

“The businesses should know that if there’s an issue with damage they should be reporting it to the appropriate people.”

Henley Mayor Julian Brookes said: “I didn’t see the fatberg myself but the workmen who fixed the pipe told me they had found the rods.

“Thames Water told me it was going to write to neighbouring restaurants to remind them of the correct waste disposal protocol to prevent this happening again.

“Next time around some of the motorists who were stuck on Remenham Hill might be applying for some sort of compensation.”

Thames Water warned against pouring fats, oils and grease down plugholes, saying they should instead be disposed of in the bin or collected in a container which can then be picked up by a registered waste carrier.

Alex Saunders, the company’s network manager, said: “We’re sorry for the inconvenience the road closure caused but we needed to carry out this crucial work to prevent nearby properties from being flooded.

“The defects to the sewer were caused by a large amount of fat, oil, grease and other items in the sewer solidifying, commonly known as a fatberg.

“Every year we tackle 85,000 blockages like this, which is why our message is simple: If it’s not poo, pee or toilet paper, please ‘Bin it — don’t block it’.

“We will be visiting local businesses in the near future to remind them of their legal requirements and their responsibility to ensure that fat, oils and greases are removed correctly.”

A CAU spokeswoman said: “We are a professional business and have a full grease management system in place at the restaurant that is maintained daily by a professional team of operators.”