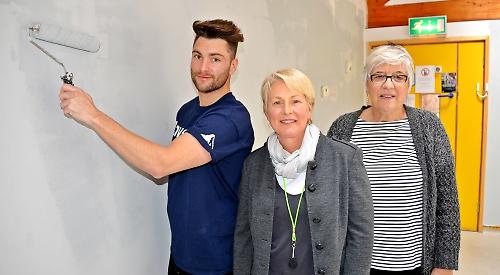 VOLUNTEERS redecorated Henley’s children’s centre in preparation for its re-opening on Monday.

Staff from Invesco Perpetual spent an afternoon painting the inside of the centre at the d:two centre in Upper Market Place as part of the company’s Invesco Cares scheme.

The service was under threat of closure when Oxfordshire County Council announced plans to shut all 44 of its children’s centres and replace them with eight new facilities in order to save £8 million.

However, 34 centres across the county are to remain open after communities came forward to run them.

The Henley facility, which was previously run by the Rainbow Children’s Centre, will be run as a “healthy living facility” by Henley Baptist Church, which owns the building, and youth and community group Nomad, which is also based at d:two.

It will offer soft play and keep-fit sessions and group meetings on healthy living, food and nutrition and tackling negative eating habits and other addictions. The project is expected to cost £36,000 in its first year, which will be partly covered by a grant of up to £10,000 from Henley Town Council plus additional start-up funding from the county council.

Sue Prior, Nomad’s project director, said: “We have good links with Invesco and, after a chat with them, they decided our cause was worthy of support.

“We’re very grateful that they’ve given up their time to come and help as the centre hasn’t been repainted since it first opened a decade ago. The handover has given us a chance to clear everything out and spruce the place up a bit.

“There will be a charge when we re-open as we have to ensure this is a viable operation but it will be reasonable as we want to be accessible to everyone. The parents are delighted that someone has picked it up and run with it rather than letting it go under.”

Karen Ashton, who lives in Caversham and is a regular worshipper at the church, will be employed as manager and work alongside a team of volunteers.

She said: “We’re excited about re-opening as we will offer lots of exciting opportunities, including mobile play, soft play and all kinds of creative and constructive activities.

“Because we have no budget, I’m the only paid member of staff and we desperately need volunteers who can give maybe three hours a week, so I would love to hear from anyone who can help.

“I’m absolutely thrilled to be taking this on and I can’t wait to get on and start working with the children. The first five years are a critical time in a child’s development so it’s vital to inspire them and expose them to as many different activities as possible.”

Shane Wilson, who led the Invesco team, said: “We’re really happy to be involved with such a great community project and glad that it will be helping families and children in Henley.

“We’ve wanted to do something like this for a while and feel very lucky to work for a company that gives us time to take part in initiatives like this.”