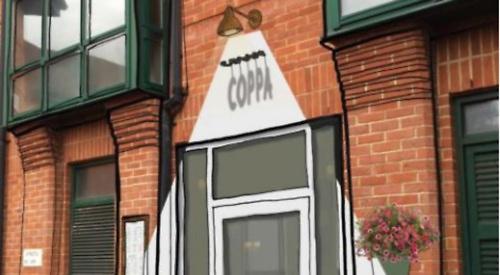 THE renovation and rebrand of a Henley restaurant has been opposed by town councillors.

Plans have been drawn up to convert Strada in Bell Street into a branch of the Coppa Club by Strada Trading, which owns both brands.

The company wants to change the frontage and side entrance and to install new signage.

The frontage and fascia board would be painted sage green and the existing canopies would be replaced with striped ones. Six antique copper wall lamps and an illuminated clock fascia sign would be installed.

The side entrance would have a single glazed door and glazed panels either side plus metal lettering with a copper lamp above and white exterior grade vinyl to create a “ray of light effect”.

Members said they were concerned about white vinyl being stuck to the outside of the building, which is in the Henley conservation area. Mayor Julian Brookes said: “I have no problem with it in principle as long as they conform to the traditional shop front design brief.”

Councillor Jane Smewing added: “It looks as if they cannot do it in anything other than vinyl or they will have to have a different design.”

Committee chairman Simon Smith urged the company to use natural materials instead.

The Henley Society, a conservation group, has also objected to the application, saying the vinyl finish and a large south-facing advertisement on the wall of the adjoining property should not be allowed. South Oxfordshire District Council, the planning authority, has told the company that it should follow Henley’s traditional shop front design guide.

Conservation officer Emily Karau said: “The use of traditionally detailed downlighters is acceptable in moderation for a later operating business, however please ensure that these are a softer warm light.

“[Please] remove internal illumination from the clock face logo or form agreement about when this can be lit to prevent it being on all night and reduce intensity of illumination to a lower ‘glow’.”

She also says the proposed Dutch blinds should be pull-out canvas blinds as used at the Coppa branch in Oxford Circus.

Ms Karau also questioned the vinyl and how it would be attached to the brickwork.

A decision will be made by the district council by May 29.

The restaurant would become the fifth branch of the Coppa Club, which was launched at the Great House in Sonning in 2014.

Strada opened in 2008 and is one of 33 branches around the country.