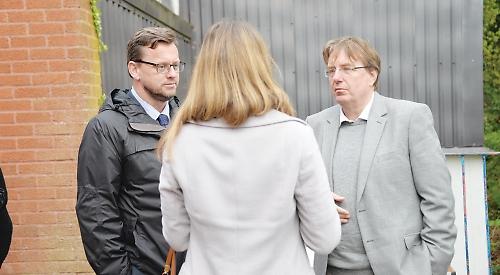 PARENTS were left angry and scared for the future of their children after meetings about the potential closure of Chiltern Edge School.

Hundreds of people attended the three events at the school in Reades Lane, Sonning Common, to hear about Oxfordshire County Council’s consultation on the school’s future.

It comes after the school was placed into special measures last month following an Ofsted inspection in which it was rated “inadequate”.

The meetings were hosted by Roy Leach, strategic lead for education sufficiency and access at the county council, and officers from Reading Borough Council were also present.

The Henley Standard was not allowed into the meetings but a number of parents came out saying that Mr Leach had told then “a bad education is better than no education”.

Sara Maughan, from Sonning Common, said her meeting made her furious. She said: “I have a son who left the school last year who has special educational needs, an area which was heavily criticised in the Ofsted report. But the pastoral side of the school is known for giving support to pupils.

“My son did not get great results but he came out of the school a happy and well-rounded child. Ofsted doesn’t have a tick box for something like that.

“What the school gives children is more than what happens in the classroom. It was our first choice school for our other child, who is in year seven. He is so happy and does not want to move.

“The people at the meeting were angry as we were not told anything we didn’t already know.

“The panel did admit they were not giving the school enough support. It doesn’t give you much confidence.”

Paul Anderson, of Grove Road, Sonning Common, said: “I would say the meeting was hostile. Roy Leach did not answer any questions because he did not have answers.

“The county council has known about the Ofsted report for two months yet nothing was being done until the last few days.

“I think we would be naive to not take the view that round a table somewhere a decision has already been made to close the school. A lot of things add up to that conclusion with what they are saying and the way they have gone about it. I really hope it does not happen.”

Paul Wigmore, from Caversham, attended the first meeting for prospective parents of children due to start at Chiltern Edge in September.

He said: “It all seems like a foregone conclusion. They will perhaps come back and say these are the steps to take and the feedback from our consultation.

“People seemed to be frustrated, scared and angry. Ultimately, it seemed that the county council was going through its process.

“The people in the room were thinking about their kids and their education. We are way more involved than my parents were.” Matt Carey, of Woodcote Road, Caversham, said: “There was no mention of how the school could improve to make it attractive to academies or what we could do to support the school as parents. There was none of that.

“I know the county council is only looking at the closure part but that should be worst case scenario. There was no mention of trying to help the school.

“At the two meetings I sat through people started by listening quite carefully but after a while they got frustrated. When people were asking questions they seemed angry and concerned.

“People seemed to think closure was a foregone conclusion and that their kids were not going to have a school place to go to..”

David Bullivant, from Caversham, said he felt there needed to be more focus by the council on keeping the school open.

He said: “Both councils have said there are no places for children but never brought up how they were going to keep the school open.

“Having spoken to the MPs, they are looking at academies. We are going to step up the campaign and try to grow it even more.

Henley MP John Howell and Reading East MP Rob Wilson were allowed into the meetings but not to speak due to the forthcoming general election.

Speaking after the meeting Mr Howell said: “The county council say they are following statutory guidance but I do not believe that is the case and it is something I will pick up on in more detail.

“I don’t think the message they have been giving is particularly helpful. The important thing is to find an academy to take the school on and that is what we are working towards. It’s important we work hard and quickly on that because that is the route to keeping the school open.”

Lucy Butler, director for children’s services at the council, said: “We’re well aware of the strength of feeling and that the implications of the recent Ofsted report have caused great anxiety for families.

“I assure parents that the council’s top priority in holding this consultation is to improve educational opportunities for local children and we are looking at all possible options to achieve this.”