Girls step in for PM at opening of new school playground 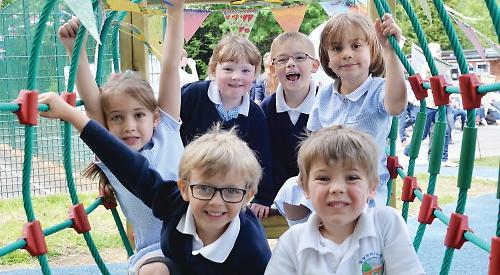 TWO girls stepped in for the Prime Minister to officially open their school’s new £45,000 playground.

Francesca Cole, 11, and Matilda Stickley, five, cut the ribbon to unveil the new equipment at Sonning Primary School, watched by about 250 parents, staff and fellow pupils.

The pair were called up as last- minute replacements for Theresa May, who lives in the village and had been due to attend but had to cancel as she was campaigning for next month’s general election.

Instead, she sent a message of congratulations.

The money for the playground was raised over two years by the school’s parent-teacher association. A black- tie ball and auction raised almost half the total.

After a performance by the school choir, there were speeches by Laurie Butler, chairman of governors, and Ann Daniels-Smith, chairwoman of the parent-teacher association.

Mrs Daniels-Smith said: “I am so proud of what we’ve all achieved. To help raise sufficient funds, we put aside a set amount of monies raised each month to ensure we could complete the works.

“Along with the black tie ball, we held the Sonning village show at the school and we have regular cake sales and quiz nights, school discos and, of course, our Christmas fayre.”

The speeches were followed by the official ribbon-cutting and the cutting of a celebratory iced cake.

Pupil Madeleine Jones, 11, said the playground was popular with all the children.

“Having my classroom next to the work has been pleasant,” she said. “When you looked out of the window you could see it being built.

“The builders were friendly and their work has paid off. Our lunchtimes have been transformed.”

The play area was built by Creative Play, of Flintshire. The work included groundworks to prevent the site flooding and this cost about half the money.

In her message, Mrs May said: “I would like to congratulate Sonning Church of England Primary School on the opening of their new playground.

“I had the pleasure of being present at the auction in March last year where the astonishing amount of £21,000 was raised and I am very happy that this project has now been finalised.

“The new playground will, without a doubt, become a hit and I hope both staff and students will enjoy the day and that the weather is wonderful.”