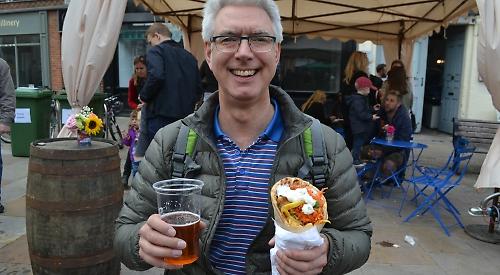 A STREET food festival held in Henley for the first time has been hailed a success.

Nineteen stalls were set up in Falaise Square on Saturday, selling snacks from around the world including chilli, paella, bratwurst, squid and frogs’ legs and chips.

Despite intermittent downpours, the event attracted a good number of visitors.

Mayor Kellie Hinton visited in the late afternoon with her daughter Hallie, six, after returning from a charity event in London.

She said: “I was ready to get some jerk chicken by the time I got back and we finished the last of it. A lot of the food had sold out.

“I also came away with some Georgian spices which I will use in my cooking.

“There was a really nice feel to the day and I think it was a great success. There are some things to work on and tweak — it would be great to have a few more local people involved in the next show.

“Hopefully, we can build on it and make it even bigger and better next time.”

Town manager Helen Barnett said: “We’re always looking for new ideas to entice people into the town and to visit other retailers.

“We were very encouraged with the amount of people who came out, especially considering the weather. A few stalls ran out of food, which shows how popular it was.

“I’ve seen the retailers and hospitality around the square and they were really pleased. It was a little disappointing we didn’t have a few more of our homegrown businesses but that’s something we can work on next time.”

The event was organised by Blue Collar Street Food and supported by Henley Town Council.