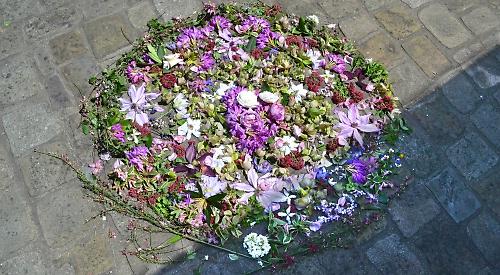 A POP-UP Japanese rock garden has been created for the fourth annual Chelsea Fringe Henley festival.

It was designed and built by Giles Reynolds, who is head gardener at Friar Park, off Gravel Hill, in the courtyard at King’s Arms Barn and will remain until June 4.

It has a small octagonal gravel bed where the public can draw shapes using a rake. Practioners of Zen Buddhism, which is popular in Japan, believe this calms the mind and improves concentration.

It was unveiled on Monday by Mayor Kellie Hinton and her escort and fellow town councillor David Eggleton.

Artist and hypnotherapist Amanda McGregor, from Checkendon, laid out a Buddhist symbol called a
mandala on the courtyard using a mixture of clematis, rhododendron and hellebores.

She and other therapists at the Be Well Centre, which is held at King’s Arms Barn every Monday lunchtime in term time, hosted an art exhibition inside. Also present was Keith Thatcher, a keen gardener who lives next door and has opened his garden to the public for the duration of the festival.

Mr Reynolds, from Bourne End, decided to contribute to the festival after hearing about it through the Henley Gardeners’ Guild, an informal discussion group which he belongs to.

He said: “It struck me as an opportunity to create something that people could interact with.

“I don’t think it’s going to convert anyone into a Zen master but it is fun and a good way of relieving stress. In all its forms, gardening has been scientifically proven to be very relaxing and good for people’s wellbeing so I guess I’m lucky to do it for a job. This will help people to get some of those benefits, even if they’re just stopping off for a few minutes.

“Some of the festival organisers had been to Japan and were able to give me photographs of archways, which gave me the inspiration for my design.

“I’m not sure how people will react to it. It’s a bit off the theme but it’s something they can stop and do with their hands instead of looking at it a few seconds before walking off to Starbucks. I enjoyed making it as I’ve never contributed to the festival before. I think it’s a great event — Chelsea itself is fantastic but this is more accessible and gives everyone in the community a chance to express themselves through horticulture.”

Councillor Hinton said: “The whole festival is wonderful but this particular aspect is especially relaxing and I hope that lots of people will take advantage of it.

“Perhaps we could set up something like this and get the town council using it before every meeting. It might make the atmosphere a bit nicer!” On Sunday, about 100 people attended a “peaceful garden” event in the grounds of the Friends Meeting House in Northfield End.

Visitors could sit in the garden at the back of the premises while enjoying tea and cake.

It is the first time that the Henley Quakers, who meet at the house, have taken part in the festival. They will be hosting another festival event next Saturday (June 3).

Sharon White, a member of the group, said: “It was received very well and we were lucky with the weather. We would like this event to be an outreach to the people of Henley and the wider area to let them know that Quakers are always welcoming new visitors.

“This garden is open all the time and even if the gate looks closed, you can sit here for peaceful reflection.”

A garden gong bath will be held at St Katharine’s in Parmoor from 7.30pm to 9pm on Tuesday. Visitors can wash away the stresses of the week in the peaceful garden to the sound of multiple gongs.

Southbrook Cottage in Hambleden will host “Poems and Prosecco” from 3pm to 4pm on Thursday. Tea and cakes will be on sale but admission is free.

Dunsden Community Orchard will be open for the public to explore from 2pm to 5.30pm next Saturday.

The festival will climax with a floral flotilla on the River Thames at Mill Meadows in Henley from 2pm to 4pm next Sunday.

Boat owners will decorate their craft with a horticultural theme and parade up and down the river. Spectators can enjoy a picnic on the banks and musicians will perform on the bandstand.

Victoria Newton, from Peppard, who jointly runs the festival with Jane Macfarlane Duckworth, from Hambleden, said: “We’ve had an amazing start to the festival and it looks like it’s going to be another successful year. Attendance has been good at all our events so far.”