203 people, including Henley Mayor and our reporter, run 5km while tied together 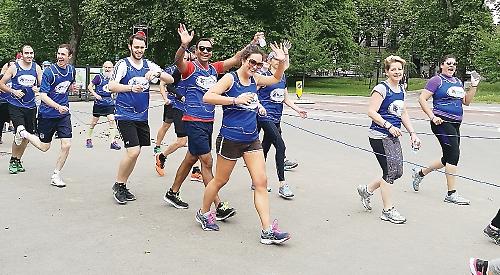 THE Mayor of Henley helped to set a Guinness world record by taking part in a bizarre charity run.

Kellie Hinton was one of 203 people who completed a 5km circuit of Hyde Park on Saturday while tied together by a rope, beating the previous record of 179 people.

The event was organised by Evan Williams, the son-in-law of Dick and Judith Fletcher, who are friends of Councillor Hinton and live at Mill End, near Hambleden.

It raised more than £4,000 for Heads Together, a mental health awareness campaign led by the Duke and Duchess of Cambridge and Prince Harry and the mental health charity Mind.

The Fletchers drove to London on the day to help runners register and cheer them on.

Mr Williams, 30, chose to support the initiative as his wife Lucy, who works in marketing, went through a period of anxiety due to workplace stress in 2013.

He also ran for the cause in this year’s London Marathon while tied to his brother and cousin, setting another record.

Entrants were divided into three groups and wore wristbands through which a length of rope was threaded and the groups then ran side by side, led by Mr Williams.

The runners, who were counted at the start and finish by an independent race timing company, also included Natasha Bowcott, from Peppard, and Henley Standard reporter James Burton.

Councillor Hinton carried her mayoral chain in a bag but did not wear it because it was too fragile. The runners finished in about 50 minutes as they had to stop twice for horses who were spooked by the sight of such a large group.

They cheered as they made their way around and many onlookers cheered back and clapped while taking pictures on their mobile phones.

At the end, all runners were given a bottle of water and posed for a group photograph on the park’s bandstand.

Councillor Hinton, who raised £342 in sponsorship, signed up about a month beforehand and trained a couple of times a week.

She also walked many miles around Henley while canvassing for Henley Residents’ Group before the town council by-elections on May 4.

She said: “It was absolutely fantastic to be part of a successful world record attempt. It wasn’t anywhere near as hard as I’d feared, although my legs were aching a bit the next day. There was a great sense of camaraderie and everyone was cheering and shouting encouragement so it felt very positive to be involved.

“I was getting lots of messages wishing me luck on the morning as well.”

Mrs Williams, 32, who attended Rupert House School in Henley and Queen Anne’s School in Caversham, said: “I couldn’t have hoped for a better day.

“The atmosphere was wonderful and we were incredibly lucky with the weather because it started raining soon after we had finished.

“People had lots of energy and were kind and supportive to their fellow runners.

“Some people were clearly struggling towards the end but everyone was happy to slow to their pace instead of trying to push on ahead. It was brilliant to have Kellie’s support, especially at such an early point in her mayoral year.

“She raised the most money out of everyone and was energetic and bubbly, which made it all the more fun. We were so lucky to have her on board.

“It’s great to get people talking about mental health. I had my own encounter with anxiety but it’s very common and lots of others who signed up were sharing their stories with Evan.

“Everyone goes through a period when they don’t feel like themselves and we need to get a dialogue going in order to normalise it.”

Mr Fletcher said: “It was a lovely day out and a wonderful team effort.

“It was great to see people giving up their Saturday to join together and raise an impressive amount of money.

“The only question is: can Henley now beat that record? I’m sure there are plenty of people who would get involved if the opportunity was there.”

Mrs Bowcott, whose husband Richard is a friend of Mr Williams, said: “I go to a fitness boot camp three times a week and did a 5km run on the Tuesday before, which went fine so I knew there weren’t going to be any problems.

“It was good fun and also for a very good cause — I think it’s very important to raise the profile of mental health in the media.”

Mr Burton, of Queen Street, Caversham, said: “I’m usually pretty lazy on a Saturday morning so it was a great reason to be out doing something and was a lot of fun.

“Everyone was just out to enjoy themselves for a good cause and it wasn’t in the least bit competitive.

“Having struggled with anxiety as a teenager, I’m also very much behind the cause.

“There’s still a taboo around mental health problems but they’re incredibly common and being able to acknowledge and talk about them honestly is half the battle.”

Donations can be made online at race-nation.com/sponsor/e/10772