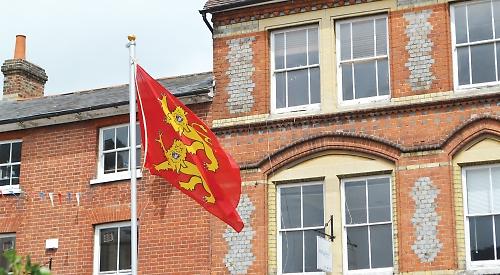 A GROUP of almost 30 visitors from Henley’s twin town of Falaise in Normandy enjoyed a four-day trip to this area.

The delegation was welcomed by members of the Henley Falaise Twinning Association for the biennial visit.

There was an official reception with nibbles and Prosecco in King’s Arms Barn attended by the Mayor Kellie Hinton. Denis McCoy, chairman of the association, said: “I think our country does not need to get isolated. We must maintain our friendships and communications with European countries but at the same time build new, wider friendships elsewhere.

“I think that’s even more important now that we’re leaving the European Union.” Serge Loock, chairman of the Falaise Henley Twinning Association, added: “I’m a man of the world so developing friendships even between two small parts of this world is a little drop that you put in the ocean.”

He thanked the hosts for their “charming” welcome, adding: “Like every time, it’s great. We look forward to visiting our friends every two years.

“It’s wonderful — the town and the area are very nice. The only thing we regret, or are disappointed with, is the lack of new members, especially youngsters.”

Councillor Hinton attended the reception with her six-year-old daughter Hallie and met the deputy mayor of Falaise, who brought along his daughter and seven-year-old granddaughter.

She said: “Hallie came up to me at the beginning and said, ‘how are we supposed to talk to each other?’ and I said, ‘you know, figure it out’. They managed to communicate without speaking the same language.

“It was a real boost for the room to see the potential future of our twinning here getting on so well.

“Regardless of what happens with Brexit, it’s important that we stay close friends with Falaise and our other twin towns of Leichlingen and Bled.”

On Friday, half the visitors spent the day in Oxford and the other half on days out with their host families. On Saturday, they had lunch at Stonor Park followed by a guided tour. In the evening there was a dinner with entertainment at Shiplake Memorial Hall before the party returned home on Sunday.

Mr McCoy said: “Everybody I’ve spoken to said they had great fun.”