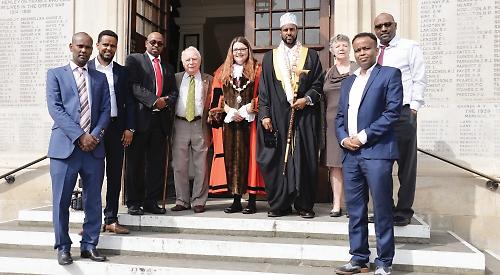 REPRESENTATIVES from Borama in Somalia visited Henley ahead of a planned celebration of the link between the two places.

The event to mark Henley’s friendship link with Borama will be held in Mill Meadows on Saturday, July 15 from 1pm. There will be singing and dancing near the bandstand.

Scores of people from across the UK are expected to attend, many of them in traditional costumes.

On Monday last week, a delegation of representatives of Borama, who now live in the UK, met Mayor Kellie Hinton at the town hall.

They discussed the twinning of the two places and plans for the celebration day.

Brig Page founded the link after visiting Borama in 1982 and early efforts included fund-raising to renovate a power plant in the city.

The two places lost contact during the outset of the Somali Civil War in the Eighties but resumed the relationship in 1992.

For the last three years Henley has held an event to celebrate the twinning. More than 100 residents of Borama attended last year’s event.

Cllr Hinton said: “This year we want to make a real song and dance about it and get lots of people from Henley and the surrounding areas to come.

“We are the only town in the UK to be linked with an African city, it’s usually places in France and Germany, which we have too!” Fathi Mikador, a member of the friendship association, said: “It’s a privilege to be linked with Henley, it is well publicised in the media and on national TV in Somalia.

“It raises awareness and helps with cultural exchange and tourism.”