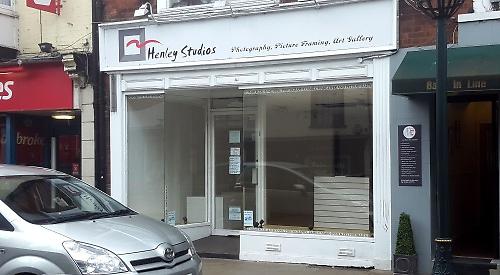 A HENLEY photographic studio and art gallery has shut.

Tim Ruddock, who founded Henley Studios in Duke Street in 2009, has wound up the business, saying his rent and business rates have risen so much that it is no longer viable.

He is still living in a flat above the premises, which were previously the studios of photographer Stephen Agar, and says he does not know what his next step will be.

The shop offered photographic services including family and commercial portraits and advertising and events photography as well as picture framing. It also hosted regular exhibitions by guest artists and was a participant in the annual Henley Arts Trail.

Before shutting down, Mr Ruddock warned his regular customers and he has left a notice on the door blaming “circumstances beyond our control” for the closure and saying any outstanding orders will be honoured.

He said: “I’m afraid it’s down to rent and rates — the same old story.

“So many of my customers were disappointed at the news but only the Costas and Starbucks of this world can afford to rent units these days. I suppose you can’t blame landlords for wanting to make as much money as possible but the Eighties heyday of the small businessman is long gone.

“To be totally honest, I think Henley is going to the dogs. How many hairdressers, nail bars or coffee shops can you fit into a small market town?

“We had a great base of loyal, regular customers but it was just too expensive to carry on in the end.

“There wasn’t a single, sudden increase — the rent and rates have just steadily increased and it became an ongoing struggle.

“When you’re working 12-hour days, six or seven days a week, it just isn’t worth it any more. At some point, you have to decide that enough is enough. I feel really bad for the artists that exhibited here but there’s nothing more I could have done.”

Mr Ruddock said the growing popularity of digital cameras had added to the pressures on his trade.

He said: “I mostly work in advertising photography and a contact of mine who is very highly regarded says he was making more money in 1985 than he is now.

“Anyone with a £300 camera is now calling themselves a photographer. They just take some fairly average shots and adjust them with computer software afterwards.” The business is the latest in Duke Street to close. The Hubbledays kitchenware shop, women’s fashion outlet Noa Noa, jeweller Precious Love and giftware shop St Audrey’s all shut last year but have since been reoccupied.

Mr Ruddock said he might move to Portugal, where he has family.

He said: “Independents sell the same stuff as the chains but people tend to shy away from them, sadly.

“Hubbledays was a great shop and it’s very much missed. We still have some excellent independents like the Bell Bookshop but they’re getting fewer and we’re slowly becoming just like every other town in Britain.”