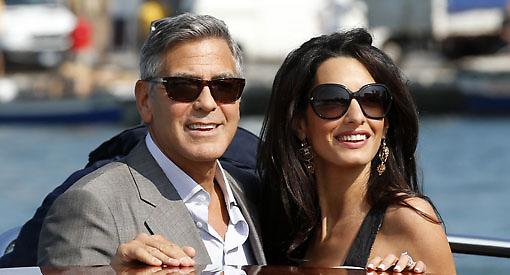 AMAL Clooney has given birth to twins.

Ella and Alexander were born on Tuesday morning and are the first children for the human rights lawyer and her Hollywood actor husband George Clooney.

A statement for the pair, who live in Sonning, said: "Ella, Alexander and Amal are all healthy, happy and doing fine. George is sedated and should recover in a few days."

George Clooney, 56, met his wife in 2013 and married a year later in Venice when the couple bought Mill House, a Grade II listed manor house on the banks of the River Thames, for a reported £10 million.

The couple reported to have spent £12.5 million on improvements to their home in readiness for their new arrivals.

In March, Oscar winner George, known for his roles in Argo, Gravity and Ocean's Eleven, surprised an 87-year-old fan at a care home in the village with a bouquet of flowers for her birthday.

He turned up unexpectedly at the Sunrise of Sonning residence to see Pat Adams after staff had written to him saying a visit from him would make her dreams come true.

The Clooney's have shown they are keen to embrace village life. In October, the Henley Standard reported how they gave a £1,000 donation towards new solar panels for village hall.