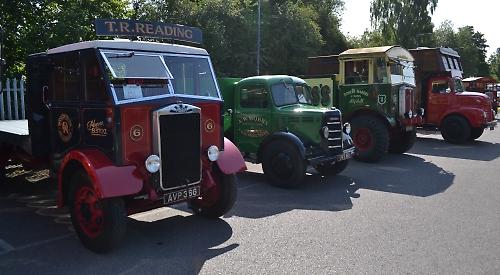 THE Mayor of Henley caught a lift to the town hall on a vintage double-decker bus at the 33rd annual Ridgeway Run.

About 70 classic commercial vehicles gathered at the station car park on Sunday morning before setting off for Quainton, near Aylesbury. They included an American fire engine, a police car, haulage vehicles, vans and lorries.

Councillor Kellie Hinton attended with her daughter Hallie, six, and the pair hopped aboard a 1964 Routemaster bus, owned by Shaun Bradbury, from Reading.

The Mayor was presented with a bouquet of flowers by Janet Ayre, secretary of the Historic Commercial Vehicle Society (South Midlands area), which organises the event. Cllr Hinton said: “I don’t drive, so I’m used to the bus. It was Hallie who chose to go on the double-decker and she really enjoyed going on the top deck.

“I think she would have preferred the journey to last longer — probably all day.

“I know the bus wasn’t that old but it was still before my time, so it still felt very vintage to me!

“This is a lovely tradition between Henley and the society and it was fascinating to see all the old vehicles and in one place.”

l To mark National Bus Week, on July 3 Cllr Hinton will hold her councillor’s surgery on board buses run by White Coaches around Henley. She said: “People can come and talk to me about any issues in the town.”