Swans and cygnets removed from river 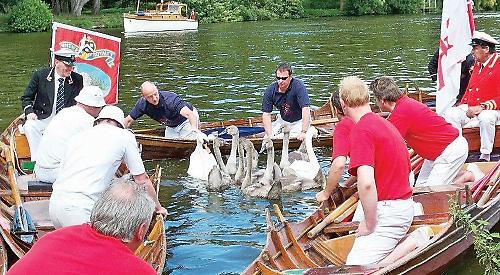 SWANS and cygnets have been removed from the River Thames ready for the start of Henley Royal Regatta on Wednesday.

David Barber, the Queen’s Swan Marker, removed the birds from the Henley Reach with the assistance of swan uppers from the Dyers’ and Vintners’ livery companies on Monday.

The operation was undertaken with the full co-operation of the regatta, which is committed to the protection of swans and other wildlife that occupy the reach during the racing season.

Mr Barber said: “It is most important that the swans and their young cygnets are removed from the river to avoid serious injury or fatalities that could be caused by the blades.

“The swans and their offspring are taken to the headquarters of the charity Swan Support at Datchet, where they are looked after for the duration of the regatta.

“They are returned back to Henley after the regatta has ended and are released to the same location from which they were taken.”