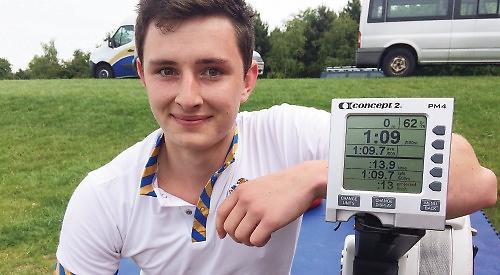 A SCHOOLBOY has broken a world record on a rowing machine.

Matt Rees, a pupil at Blue Coat School in Sonning, beat the fastest time for 100m by a 17- or 18-year-old at the National Schools Regatta held at Eton Dorney Lake.

The 18-year-old, who will be in the school’s eight for the Henley Royal Regatta qualifiers today (Friday), recorded a time of 13.9 seconds.

Matt said: “It feels pretty good and it was a nice reward after five years of rowing at Blue Coat. I feel like I’m leaving a bit of a legacy!”

Rob Edmondson, the school’s head of rowing, said: “Matt has been rowing at the school for the past five years , following in his brothers’ footsteps.

“He has always tried sprints on the ergo at the start of longer training sessions and he currently holds the school ergo record for 2km.

“It’s great to see some recognition for all his determination and commitment to the sport and the school boat club.”