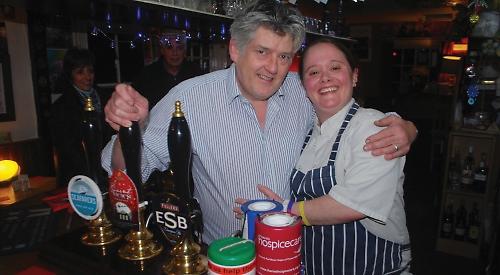 A PUB landlord says his trade will be badly hit by the two-month closure of the main road between Henley and Reading.

Nick Willson, who runs the Flowing Spring in Playhatch with his wife Hazel Lucas, fears shutting the A4155 will effectively cut off customers from Caversham and Reading.

The road closure, which will begin from late July or early August , will be from just after the junction with Spring Lane going towards Reading to near the Playhatch roundabout, a distance of about 200m. The official diversion will send drivers more than 20 miles in the opposite direction.

Essential repairs are needed after the carriageway collapsed in April following incidents of flooding in recent years.

Mr Willson, who is hoping to complete the purchase of the pub’s freehold from Fuller’s, said: “Although the regulars will come hell or high water, this is not going to be very helpful, particularly for people coming from south of the river and from Reading and Caversham.

“They are going to have to go all the way to Dunsden, Binfield Heath, through Shiplake and back. People will be able to come from Shiplake down to the Spring Lane junction and go into the car park as normal.

“It is going to impact severely on trade.”

Mr Willson said he appreciated the work had to done to prevent the road subsiding, but would be seeking compensation from Oxfordshire County Council, the highways authority, as July and August are the pub’s peak time for trade.

He said: “At the time when we usually make the most money in the year, we won’t, so it’ll affect our overall turnover, which isn’t great.”

Mr Willson has met with local county councillors Stefan Gawrysiak and David Bartholomew who have been pushing for the contractors to work through the night in order to finish the job more quickly.

“We have no objection to that,” he said. “If you have got a machine hammering day and night you will hear it and will probably get vibration from it but I would still rather it’s done more quickly.”

Cllr Gawrysiak, Henley’s representative on the council, said: “The work will cause disruption but it has to be done.

“The only solution is to put steel piling along the whole of that 200m section. In order to do that we have got to have heavy machinery, which can’t operate on a single side of the road.

“David Bartholomew and I have driven the whole of the diversion route. The council has come up with comprehensive signage and we pointed out extra signage to avoid heavy goods vehicles taking rat runs down country lanes.”

The council says any diversion has to be on the same class of road as the one that is closed. This means traffic will use the A4155 through Caversham, then along the A4074 to Crowmarsh Gifford before taking the A4130 to Henley before rejoining the A4155 or vice-versa.