Blight of the blue bin bags 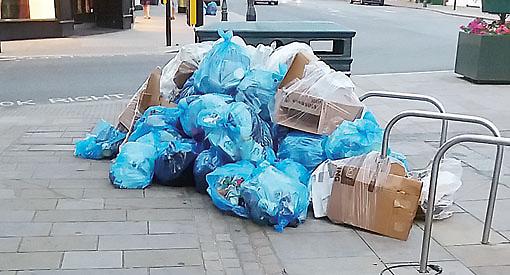 THE streets of Henley are being piled high with rubbish just days before the town’s busiest week of the year.

Bins are not being emptied quickly enough and trade waste in blue bags is being left out overnight, which damages the late-night economy, say councillors.

It comes on the eve of Henley Royal Regatta, when more than 200,000 people are expected to visit between Wednesday and Sunday, followed by the five-day Henley Festival.

“It’s shocking because businesses had got used to them,” he said. “Morning collections completely screw up the night-time economy. The broader aspects involve Biffa and South Oxfordshire District Council and I have been on to them regarding this.

“They need to make a special effort to do with Henley in terms of double emptying of bins and really cleaning the streets.

“It’s cleaning for the regatta and the festival but it’s important at all times of year. We need to have a better service.”

When Cllr Gawrysiak was Mayor in 2013/14, he brokered a deal with contractors to collect business waste in the evenings instead of the early morning.

Cllr Gawrysiak, who is now a town, district and county councillor, said the arrangement worked very well but recently the evening collections stopped without any notice.

He said: “It has really come to the fore at the moment and we would want the contractors to reinstate those evening collections. It could be temporary if they have a problem or it’s not convenient for long-term collections.

“But we can’t have rubbish being put out a 5pm and it not being collected until the next morning. You can go out for a nice meal in the evening and have to look at bags of rubbish. That’s not acceptable.”

The agreement with both companies was that they would collect at 5pm on weekdays and Biffa would pick up for both of them on Saturdays.

Councillor Ken Arlett, who was elected to the council last month, said the waste problem had persisted since he was last on the town council more than a decade ago.

“We’ve been talking for 15 years about picking up bags of rubbish from outside restaurants and cafes and about bins overflowing,” he said. “The previous system worked because all the bags of rubbish were gone by 7pm. What we need to know is the reasons why it stopped.

“I was down by the river at the weekend by the bridge and some of the bags there had not been cleared for three or four days.

“It’s like graffiti — if you don’t remove it, more people add to it. It spreads with everyone dumping bags.”

Councillor Arlett called on the district council to do more to remove rubbish from the streets.

He said: “Do people come into the town expecting to see rubbish all over the town? The simple answer is no.

“The authority in charge of waste is the district council. They have got money in their coffers.

“You can’t keep cutting back on these things. They have got the council tax from the people of Henley who are fed up with what they are seeing.

“This is not rocket science - we want to the town, and the rest of the district, to look clean.”

Mayor Kellie Hinton said she had noticed piles of waste bags building up in Friday Street and at the bottom of Market Place.

She said: “It smells awful, it looks awful and if it carries on it is going to be huge issue in very prominent public places.

“It needs to be dealt and we will use our town manager to talk to the businesses.

“We need to be speaking to the contractors on behalf of the residents and people who are visiting the town.

“This is not just recycling, it is food waste that can be a health and safety hazard. We are a riverside town and we are attracting wildlife to it.”

Councillor Hinton said the heatwave had made the problem worse and she had seen flies around bags of rubbish left out in the sun.

“The weather is lovely but when it’s cooler the rubbish does not smell as much,” she added.

Councillor Hinton said businesses should consider changing contractors to one that was willing to collect in the evening, adding: “We need to sort this.”

Deputy Mayor Lorraine Hillier, who runs the Hot Gossip coffee house in Friday Street and Upstairs Downstairs tea room in Duke Street, said she had an agreement with Grundon to take her business waste but collections had changed to mornings in the last few weeks.

“I remember when Stefan arranged for collections to be in the evenings and it worked really well from a trader’s point of view,” she said.

“They had van with one person who would go round two or three times to check he had cleared everything.

“Leaving it out is damaging for the late-night economy, especially in the summer. The bags can end up being kicked around by people or tugged around by urban foxes.”

Cllr Hillier, who is a member of the town and district council, added: “We need to sit down with Biffa and Grundon to see if we can get everything removed by 6.30pm.

“With most shops any rubbish after that is only a small amount and we can prepare the bags to be collected. You can’t expect traders to come in at 4am because the collection is at 5am.

“We don’t want the town to look a mess for visitors. We want it to look beautiful for the regatta.”

A district council spokesman said: “We are not aware of any problems with the frequency of litter bin emptying in Henley.

“Our street cleaner in the town centre empties the bins we are responsible for on a daily basis and more frequently if required.

“There have been some recent incidents where bags of household waste have been left next to litter bins. We have added signs to bins where this has been a problem and have also written to people we believe are responsible.

“If residents spot any bins that are overflowing can report them to us using via the report it form on our website.”