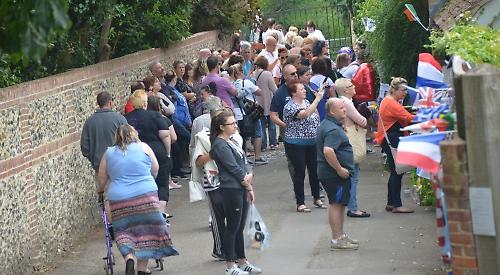 GEORGE MICHAEL fans flocked to Goring over the weekend to mark the singer’s birthday on Sunday.

Tribute concerts and candlelit vigils took place across the village as his devoted followers came from around the world to visit his home.

Michael was found dead at his home off High Street, which he had owned since 1999, on Christmas Day.

There were two sold-out concerts at the village hall by the George Michael Tribute Band on Sunday.

Other activities over the weekend included a balloon release and a memorabilia auction for charity.

He said: “The feedback we had from visitors was certainly very positive. I have already had one letter of thanks for our hospitality, understanding and always being welcoming.

“I spoke with one of the organisers and he said he was delighted with the outcome. The visitors seemed to have a wonderful time and may want to come back next year.”