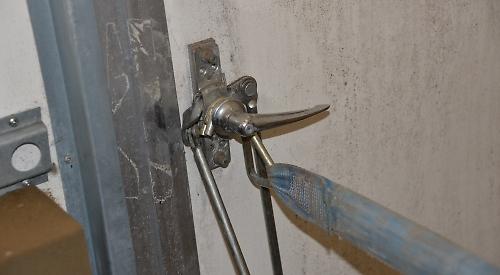 A SCOUT leader has condemned vandals who attacked a camping trailer used by his group.

Graham Edwards, a leader at 1st Sonning Common scouts, found the door of the trailer had been ripped off its hinges while it was at the group’s base in Baskerville Road.

The damage could cost hundreds of pounds to repair or the trailer will have to be written off as it was not insured.

The attack took place between 7.30pm and midnight on Tuesday, June 20.

Mr Edwards said: “This was a mindless act of vandalism by young people who clearly have nothing better to do.

“I’m sure they broke in to try to steal something but there was nothing in there. We try to support and work with young people in the village. Maybe these young people could get involved.”

The trailer, which was a gift to the group, is used to transport equipment.

Mr Edwards said: “This is not going to affect the running of the group but we are in the summer camping season and with the trailer damaged it becomes temporarily unusable. It’s unfortunate but we can manage.

“We do need to find somewhere to get it repaired but we could be in a situation where the trailer is a write-off.

“They have broken the door off its hinges and damaged the lock. The lock is like one on a patio door but they pulled the door so hard that the bracket at the bottom was broken.

“We tried to make it secure but we could not bend it back round.”

Mr Edwards, who lives in Caversham Park, was on site earlier on that evening.

He said: “We just left the trailer where we normally park it. We could see that the door was shut when we left.”

He said the vandals struck some time later as someone called the village’s police community support officer to say they had heard a lot of noise.

“I don’t know what time that was,” said Mr Edwards. “I went there the next day and found the door had been vandalised.

“It’s just a mindless act. I can’t see what satisfaction anyone would get from doing something like this. It shows a lack of thought for other people in the village who use this equipment.

“I would urge anyone who knows or saw anything to contact the police because I want to see these people caught and prosecuted.

“If they are prosecuted then we might get some money towards repairing the trailer. We are a charitable organisation working on a small budget.”

Mr Edwards said it was unlikely he would find a new door so he has secured the trailer with aluminium bars to keep it permanently closed until it can be repaired.

Anyone with information should call Thames Valley Police on 101 and quote crime reference number 43170183654.