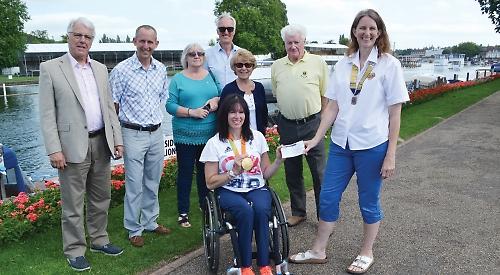 Paralympic champion Jeanette Chippington has been given £500 by Henley Lions Club to help pay for upgrades to her wheelchair. Chippington, 47, who won gold in the women’s canoeing at last year’s Games in Rio, was presented with the money at Phyllis Court Club in Henley.

The four-time world champion, who also won two Paralympic golds as a swimmer in the Nineties, wants to buy an extension for her wheelchair which will allow her to ride over different terrains.

As a child, she contracted a virus which paralysed both her legs and took up swimming as part of her physiotherapy before moving to canoeing following the 2004 Paralympic Games in Athens.

The money was raised through a “stories and stew” evening organised by the Lions in March. John Anderson, performance director for British Canoeing, spoke at the event.

Chippington, who lives in Maidenhead with her husband Stewart, said: “For I’ve been wanting to get a which means I’m able to push over grass and gravel. It means I can do some cross training and makes life a bit easier. This donation is really generous of the Lions Club.”

David Skinner, vice-president of the club, said: “Jeanette is an amazing personality and a very accomplished athlete. We were energised by her focus in supporting other people in their development and impressed by her warmth, ably supported by her husband.”